I’m a professional wrestling freak, if you’re not aware. So, let me catch up those that don’t pay attention to wrestling or those that do and somehow missed this, on what’s going on here. First, Patricia Arquette said this at the Oscars:

If you don’t want to watch that, she said, “It’s our time to have wage equality once and for all, and equal rights for women in the United States of America!”

Which then led to Stephanie McMahon, the Chief Brand Officer of the WWE and the daughter to Vince McMahon, “the” guy at WWE. Everything goes through him, Tweeted the following:

Thank You @PattyArquette for having the courage to fight for #WomensRights on such a grand platform. #UseYourVoice pic.twitter.com/q71acxMExU

To which AJ Lee, the top women’s wrestler (or “diva”), arguably, with the WWE Tweeted the following two Tweets:

@StephMcMahon Your female wrestlers have record selling merchandise & have starred in the highest rated segment of the show several times,

@StephMcMahon And yet they receive a fraction of the wages & screen time of the majority of the male roster. #UseYourVoice

Now to further contextualize this, on Monday Night Raw this past week, Brie Bella and Nikki Bella, the Bella Twins faced Paige and Emma in tag team women’s wrestling match. Paige came out to the ring, then they cued to commercial. Upon returning from commercial, they aired a few-minute-long Sting video package. Then they went to the Titans head coach in the crowd. Finally, the Bella Twins came down to the ring for the “match.”

The match starts and Brie Bella knocks Paige off the ring apron, then hits Emma with her finishing move for the 1…3…3. A one-move match after Paige had been standing in the ring for a good ten or so minutes waiting for the match to start. That pissed off wrestling fans on Twitter that rightly feel women wrestlers aren’t given their due on the main roster of WWE. The Twitter hashtag, #GiveDivasAChance started and trended worldwide. For days after the event, mind you.

In this backdrop of attention then, AJ Lee, married to CM Punk (who had a falling out with the company and is currently being sued by its medical doctor for slander), in a pretty ballsy move (since she still is employed by the WWE) called out what is essentially the second most important person at her company and a female at that, on the deplorable treatment of women in the company.

Then Vince McMahon himself Tweeted a response, which Stephanie Retweeted and then she offered a further Tweet response to AJ:

We hear you. Keep watching. #GiveDivasAChance

On NXT, WWE’s developmental brand run by HHH, the husband of Stephanie, the women are treated just as important as the men. They get long matches, characters that aren’t cliche stereotypes, they have depth and they get to be athletes. They are made to matter. They sometimes put on even better matches than the men. Because they can. In contrast, the main roster of WWE, mostly the flagship show of Monday Night Raw, gives women thirty-second matches, quasi-lesbian characters (or some variation) and the audience has been conditioned by the WWE to not care when they’re on the screen. They are the proverbial “bathroom break,” as it were.

As a huge fan of professional wrestling and women’s wrestling in particular, it’s disheartening and frustrating to see how the women are treated on Raw. I want them to matter. I want them to be able to perform to the fullest potential of their abilities. But they aren’t given that opportunity and screen time.

For one example, at Night of Champions, a PPV event held in 2009, Melina faced the Champion, Michelle McCool for the title. They put on a bad-ass match with some sick wrestling moves and it was hard-hitting. They came back to the backstage area and were chewed out for putting on “too good” of a wrestling match that would “make the boys look bad.”

WWE just wants the women to have prissy little dainty matches that mean nothing. Which is to their detriment because there’s a whole lot of women and young girls in their demographic that could look up to and live vicariously through these bad-ass women on the roster, but WWE is squandering that because of bullshit, backwards thinking. 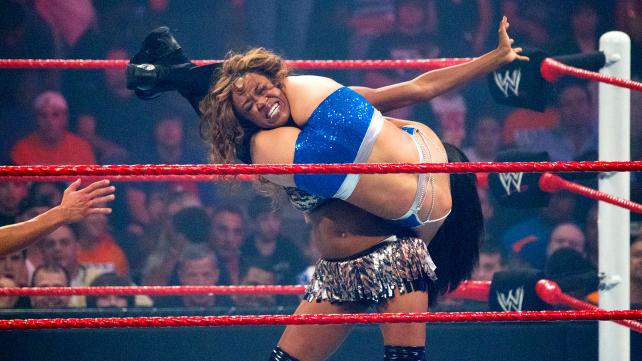