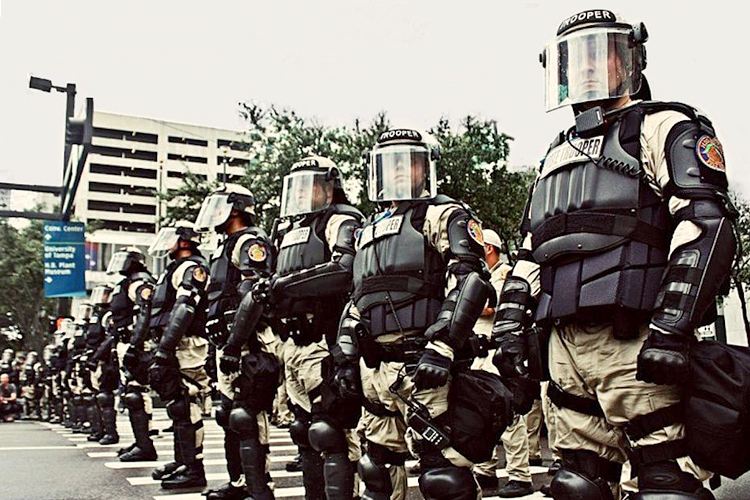 I’m disappointed in myself. I’m fiercely passionate about criminal justice issues and in particular, the policing issue. And yet, I’ve taken this long to read the definitive book about policing in America and how we got to the point where we are now: police looking like the above.

Radley Balko’s book, Rise of the Warrior Cop: The Militarization of America’s Police Forces, is first and foremost a smart book in that a.) I don’t see how anyone that reads the book and gives it serious consideration can walk away thinking Balko is anti-cop or more dastardly of those often charged with being anti-cop, wanting dead cops and b.) I don’t see how anyone can think Balko has a political bent that blinds his evaluation and analysis of American policing. Yes, he does lean libertarian, but he exhaustively demonstrates how from one Republican administration to Democratic administration back to Republican to Democratic and the Republican and Democratic Congresses in between and the Republican and Democratic leaders at all levels of government helped to create the militarized police we see today. It was a bi-partisan affair to be seen as tough-on-crime, to moralize about drug-use and to then wage a “war” on drugs.

“No one made a decision to militarize the police in America. The change has come slowly, the result of a generation of politicians and public officials fanning and exploiting public fears by declaring war on abstractions like crime, drug use, and terrorism. The resulting policies have made those war metaphors increasingly real.”

When you wage a war, those waging it are going to start looking like warriors. And when waging a war, collateral damage becomes acceptable and the focus of the war — drug users — become demonized and dehumanized. Moreover, when waging a war, propaganda moralizing about drug use and over-inflating the issue becomes readily used to justify the war itself.

Everyone is culpable in this war: the politicians that make bad policy and then look the other way as the policies are implemented by the police and how they create perverse incentives, i.e., the lucrative money in going after drug users and pushers rather than, say, solving a murder via federal grants for militarized weaponry, armor and vehicles and civil asset forfeiture where someone merely suspected of having committed a crime can have their money and property seized, the judges that become rubber stamps for search warrants and no-knock raids (which no-knock raids ought to be opposed by the police themselves since they’re so dangerous), the Supreme Court over the decades for dismantling the Third and Fourth Amendments of the United States Constitution and all but obliterating the centuries-old Castle Doctrine ideal (where your home is your castle and the government needs a search warrant to enter its premises), the police for bucking any accountability or transparency, for recruiting the wrong people with hyped up militarized recruiting videos, putting the wrong people on SWAT teams, and the public for either accepting the abating of rights and liberties and/or looking the other way, although admittedly, there’s a good chance most Americans had no idea just how brutal and vicious the “war” on drugs has been for innocents caught in its crossfire, as Balko points out case after case that ought to make your blood boil.

Year after year, the use of SWAT teams and predominately on serving drug warrants, increased, and often in a no-knock fashion, often resulting in raids on the wrong house or raids that came up with slim illegal activity anyhow.

There’s just no reason the police need to look like that and it’s not a simple gripe with optics. Optics are vital. Optics communicate what the goal of the police is and what do you think the optics of police clad in unnecessary military camouflage conveys? That they are an occupying force within the community rather than working with the community to solve issues and crime.

In the above picture, federal agents retrieve Elián from his relatives’ home in Miami. This photo won the 2001 Pulitzer Prize for Breaking News, according to Wikipedia. Why was that show of force necessary?

Why are SWAT teams being deployed for regulation violations, gambling and other petty, non-violent crimes? Why does the Department of Education have its own SWAT team?

The fundamental issue at play here is this underlying notion that we ought not to question the police. That’s why judges rubber stamp search warrants and no-knock raids, that’s why politicians look the other way, that’s why prosecutors hardly ever look to indict an officer, much less for a jury to convict one, and that’s why the public largely looks the other way or defiantly defends the police against any chance of police and policy reform. 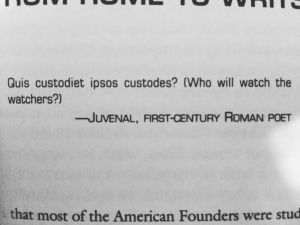 Another fundamental issue: we like the monopolizing force of the government when it’s used against our political foes. As Balko points out:

“So long as partisans are only willing to speak out against aggressive, militarized police tactics when they’re used against their own and are dismissive or even supportive of such tactics when used against those whose politics they dislike, it seems unlikely that the country will achieve enough of a political consensus to begin to slow down the trend.”

If there’s any criticism to be had of the book is that it’s not long enough. I’d love to have seen more on a.) how often police are used in mental illness crises and how often they are poorly trained and therefore, respond terribly to it and b.) the racial dynamics at play in policing. He slightly touches upon the sense that minority communities have that the police aren’t there to serve them, however.

When police officers go into policing, they a.) assume risk and b.) are there to protect and serve the public, not themselves. That’s the ideal, but that ideal has been steamrolled by the militarization of the police and the “war” on drugs. It’s more us vs. them. It’s more, kick-ass and don’t ask questions. And that’s unfortunate.

And I say this all keeping in mind two important facts: a.) while the police continue to get more militarized, crime has been trending downward for 20 years now and b.) the police are safer than they have been in either half a century or a full century depending on how you look at the numbers, whether that’s police deaths or police assaults.

Unfortunately, that only feeds the cycle. If crime is down, that’s because police militarization is working. If crime is up, it must mean more. Apply this to the “war” on terrorism, too. If there’s no terrorist attacks, it’s because the PATRIOT ACT, mass surveillance and other abridgments of our civil liberties is working. If there is one, it must mean we need to get even stricter.

Reform looks like a long-shot, but Balko’s book ends with optimistic reform goals, which should be a no-brainer to a free people in a supposedly free society. It certainly helps to have the democratizing effect and ubiquitous explosion of the smartphone. But it seems like even when there is wrongdoing caught on camera, the political trenches get further entrenched and police unions get even more resistant. 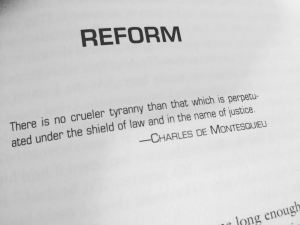