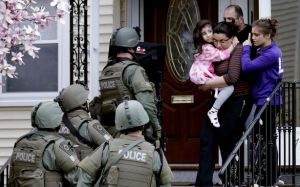 I came across two stories today that absolutely highlight, albeit in different ways, the absurdity of our police force, whether on a state level (in this case Florida) or at the federal level.

First, let’s look at the state case from Florida:

This weekend, deputies from Escambia County, Florida shot an unarmed man who went to grab cigarettes from the car parked in the driveway of his mother’s home. A neighbor called police at 2 a.m. because he suspected 60-year-old Roy Middleton was stealing the car.

They ended up shooting at him fifteen times, getting him in the leg and many bullets sprayed his mother’s car and the side of the house. Florida Escambia County Sheriff David Morgan said his officers were acting under “standard protocol.” Now, that may be the case, although it’s hard to fathom how firing fifteen shots at an old man in his own driveway constitutes standard protocol when they easily could have used a Taser at the least, but that doesn’t make it right because maybe the protocol is wrong. And they are on paid administrative leave of course.

Personally, I find the whole circumstances screwed up, whether, as I said, you want to talk about it from a protocol standpoint and if they were operating under such or if the protocol itself needs to be changed or from the standpoint of the police culture. Why exactly is the first reaction to use violence? Whether it’s the stories we keep hearing of officers shooting dogs or something like this, why are ordinary, innocent civilians being treated in this manner? It seems very wrong to me. To be fair, it’s still early, so perhaps something will come out to vindicate the police officers, but going off the available information, I would contend that something is afoul.

Then there is the case of the pressure cooker. Yes, I said pressure cooker in a sentence. I wonder how much I am risking by saying that in this post. Anyhow:

Michele Catalano was looking for information online about pressure cookers. Her husband, in the same time frame, was Googling backpacks. Wednesday morning, six men from a joint terrorism task force showed up at their house to see if they were terrorists. Which prompts the question: How’d the government know what they were Googling?

There are a few angles to this one. First off, the fact that the government knows what we are Googling is not comforting to me, whether I’m Googling “pressure cooker,” “backpack,” or not. Secondly, that a SWAT team, then, comes to confront and interrogate people with the assumption of them being terrorists. Third, this kinda flies in the face of the conventional thinking from many about the NSA leaks whereby there are no documented cases of abuse. How is this not abuse?

I sometimes think and fear that if another terrorist attack happened, the American people would willingly accept more encroachments on our privacy and liberty in the name of safety.