Sitting while black from Minnesota:

Chris Lollie [a black father], reportedly got off work at Cossetta, an upscale Italian eatery, walked to the downtown building that houses New Horizon Academy, where he was to to pick up his kids, and killed the ten minutes until they’d be released sitting down on a chair in a skyway between buildings. Those details come from the Minneapolis City Pages, where commenters describe the area he inhabited as a public thoroughfare between commercial buildings. If you’re 27 and black with dreadlocks, sometimes you’re waiting to pick up your kids and someone calls the cops to get rid of you. The police report indicates a call about “an uncooperative male refusing to leave,” which makes it sound as though someone else first asked him to vacate where he was; another press report says that he was sitting in a chair in a public area when a security guard approached and told him to leave as the area was reserved for employees. The Minnesota Star Tribune visited the seating area and reported that “there was no signage in the area indicating that it was reserved for employees.”

It’s hard to watch. It’s hard to hear how fast that escalates. And why does it escalate? Under the law, specifically Minnesota law at that, you are not required to show your ID to a police officer merely because they asked. And yet, it escalates.

The female officer shown in the beginning of the video could easily have de-escalated the encounter by saying, “You’re right, sir, you have every right to refuse to show me identification, and if you’re just picking up your kids I’m so sorry to have bothered you. If you don’t mind, I just want to walk with you to confirm that your story checks out so I can inform the 911 caller of their error. That way we can make sure this never happens again when you’re just here to pick up your kids.”

Or she could’ve said, “Sir, I totally see why this is confusing–a lot of people would think so. Let me try to explain. That totally looks like a public seating area, but it’s actually private. Don’t you think they should have a sign saying so? Calling me may seem like an overreaction, but technically they can ask you to leave. You’re walking away now, so there’s actually no problem as long as you’re not going to go back. Are you? Okay, then we have no problem, have a wonderful day.”

Why couldn’t that have happened? Officers should be looking to deescalate, not escalate a situation, which led to the above situation. 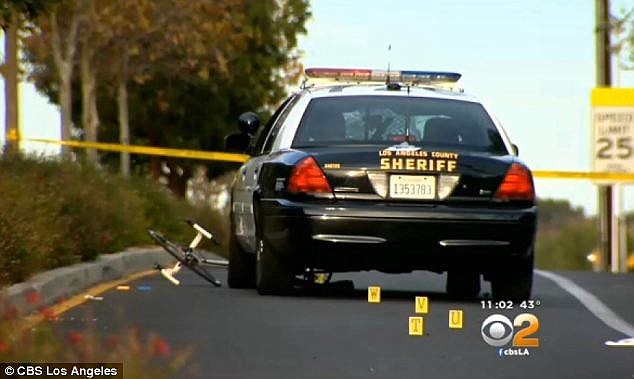 Or how about this situation from L.A.:

California prosecutors have declined to file charges against a sheriff’s deputy who struck and killed a prominent entertainment attorney and former Napster executive with his patrol car last year.

Deputy Andrew Wood was apparently distracted by his mobile digital computer when his patrol car drifted into the bike lane, running over cyclist Milton Olin Jr.

Prosecutors said in a letter released Wednesday and cited by Los Angeles Daily News that because Wood was acting within the course of his duties when typing into his computer, criminal charges are not warranted.

Under the law, law enforcement officials are allowed to use electronic wireless devices while carrying out their duties.

Talk about some bullshit. Do you think if that former Napster executive was fielding a work-related email and ran over the cop, they’d decline to file charges? Or, as a friend provided this analogy, what if a Dominoes driver struck someone, killing them, do you think they’d be let off if they were answering a work-related phone call or email? No. This is a disgusting, disgusting outcome.

Or finally, this one from Boynton Beach, Florida:

“I’ll put a round in your ass so quick.” What the fuck?

Boynton Beach Police Chief Jeffrey Katz defended the aggressive reaction of his officers in a Youtube video Tuesday, claiming the men in the car were “escalating” the situation by “recording the interaction,” causing one of the officers to fear for his life when a man “reached out of his window with a black object in his hand,” which was nothing more than a camera phone trying to record the cop’s name tag after he refused to provide it.

And therein lies the problem. Just as we are allowed to deny our ID to the police, we are within our rights to record their activities. Yet, many police officers do not like that. They escalate.