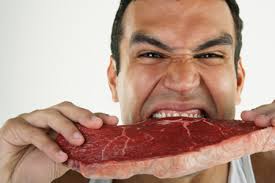 Long preface short, my conception of philosophy has always found its stumbling blocks when it comes to applying ethical considerations to children and animals (and the disabled/impaired). To that, based on a fascinating discussion in the anarcho-capitalism group I’m part of about about intervening on behalf of a tortured puppy (really “into the weeds” stuff of libertarian ethos I love), if I don’t spew out some musings, I’ll go mental.

Mostly I want to muse, I have no philosophical formulation for why eating meat is morally permissible. The only foundation I can think of is, “Meat is yum.” And meat is yum is not justification for factory farming and the process by which that yummy meat gets to my plate.

Moreover, there doesn’t seem to be a clear philosophical line for why it’s acceptable to protect domesticated animals from harm (dogs, cats) and why it’s acceptable to disregard that protection of cows and pigs in order to partake in eating them. If someone, for instance, wanted to eat a dog, I would think that’s ghastly, but serve up a cow on a platter? Wooo!

But I also don’t know what the answer is. I don’t have the fortitude to abandon meat and other animal products that arrive on my place by shitty means.

I know people on my Facebook friends list are vegetarians or vegans, so I’m wondering what their ethical considerations are, how they arrived at them (what was the breaking point?) and how they got over “meat yum.” (And this is of course outside of all the human health reasons not eating meat is probably a good idea.)