It’s no secret: I unabashedly love professional wrestling and in particular, women’s wrestling. And what an exciting time to be alive as a fan of both. Let me let you (the reader) in on a little hint: Women’s wrestling in WWE, which is the mainstream, powerhouse wrestling organization, has largely sucked for most of its existence. Women have been treated as sexual props or bathroom transition breaks (meaning, a “cool down” for the audience in between the important male matches) for a long time.

But, that’s no longer tenable for two important factors: 1.) Women’s sports and women athletes in general are seeing something of a renaissance throughout the world. The American women’s soccer team just won the World Cup in decisive fashion against Japan to huge ratings. Ronda Rousey is one of the hottest entities in sports right now, absolutely dominating and trailblazing the UFC in the women’s division. Serena Williams, despite not getting the credit she deserves still, is one of the most dominate athletes in my lifetime. As in, male or female.

And finally, women’s wrestling through WWE’s so-called developmental entity, NXT (I say so-called because it’s kinda become it’s own brand), and it’s main athletes, Sasha Banks (the current NXT Women’s Champion), Charlotte (daughter of legendary wrestler, Ric Flair), Becky Lynch and others, are setting the wrestling world on fire. Sasha Banks, a niece of Snoop Dog and only a 23-year-old, is even getting recognition for her awesomeness beyond wrestling circles.

The Nation’s Dave Zirin said this:

I was recently asked to name the five individual jocks who comprise my must-see television and, without thinking about it and without trying to make any kind of grand point or bow to the winds of political correctness, three of my five choices were women: joining Steph Curry and Bryce Harper were Serena Williams, ultimate fighter Ronda Rousey, and NXT pro wrestler Sasha Banks (seriously). Shockingly, pro wrestling, which for most of its existence has treated women like the industry was just an extension of Hugh Hefner’s grotto, is writing a script—literally—that says far more about where we are than the two-minutes-a-night broccoli serving of women’s sports delivered on SportsCenter. NXT is delivering a crew of empowering, genius women athletes like Banks, Charlotte Flair, and Becky Lynch who are winning over crowds and changing the expectations of what comprises greatness in the ring. It’s almost unreal to write, but the ways that crowds respond to Banks, Flair, and Lynch speaks with greater clarity about where consciousness is among sports fans than the tired highlight shows that treat athletics like a “man cave.”

Pretty cool, huh? I know there are some eye-rollers out there, but Sasha is truly the total package and is must-see. She has her “Boss” character down, she can talk, she’s athletic, she can wrestle and she’s charismatic. If WWE can stay consistent with her, she could be the best women’s wrestler of all time. Some even think she’s already the best in-ring talent of all time and that’s hard to dispute.

The reason all this carries even more importance and why I refer to it as a “revolution” is because one of WWE’s soon-to-be owners, Stephanie McMahon, came on their flagship show, Monday Night Raw, to announce the arrival of those NXT stars, Sasha, Charlotte and Becky, to team up with Paige and/or Naomi and Tamina Snuka to take on the Bella Twins, Nikki and Brie, along with Alicia Fox. Each NXT star not ony received a good “pop” (meaning ovation), but the crowd went apeshit when they were in the ring together, chanting, “This is awesome!” on more than one occasion. Honestly, you really have to be a diehard wrestling fan to get why, even writing this now, that gives me chills and damn near brought me to tears to watch.

It’s not a perfect segment. If I was fantasy booking, I’d probably do it differently, but it’s damn cool and hopefully signals a change in how the WWE books women’s wrestling. I’m very, very cautious because WWE sucks at follow-through and this necessitates a cultural shift more than anything, but I’m optimistic. The talent is there. Check it out: 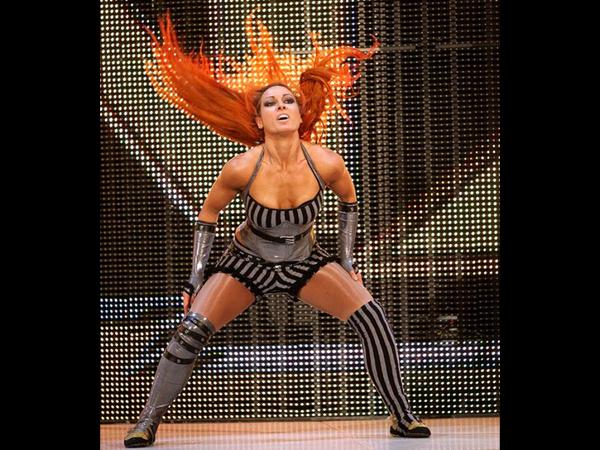