Eli Roth’s latest gore-fest, The Green Inferno, is likely to be right in the wheelhouse of fans of his (Hostel and Cabin Fever), and likely not for…anyone else. When I first saw the trailer, I likened it to a modern version of 1980’s Cannibal Holocaust. Essentially, the gist being: white Westerners encounter primitive, native village and get fucked up.

There’s actually a decent bit of social commentary in this flick. For one, Alejandro, the leader of the campus progressives, I suppose, that want to go into the Amazon and saves the tribes people from dirty, evil capitalists, is as shitty as you would expect him to be (snobby, elitist, irritatingly ideological and so on), and then somehow, he’s even worse (he was on the side of the competitor dirty, evil capitalists, didn’t care about the death of his friends, jerked off after one died (seriously) and led directly to the death of another).

Meanwhile, Justine, a wide-eyed freshman (the classic virgin character in the horror genre) joins his group and it all spirals to hell when their plane crashes in the Amazon and one by one, they get eaten and dissected to gruesome effect by the tribes people. Her motivation was women’s rights in Africa and in particular, female genital mutilation (FGM), which lo and behold, almost befell her until (unrealistically) one of the tribes people’s little boys saves her life. I’ll say, I’ve seen a lot of fucked up shit in films, but the almost FGM scene made me squirm. It was quite ugly.

In essence, Roth is nastily poking at our social media activism outrage culture and in this case, plucked those “social justice warriors” right in the real world of cannibals to gruesome effect.

They actually shot this film on location in Peru and Chile and it shows; the production is actually top-notch and the locales look gorgeous. And the tribes people look particularly intimidating. Although, naturally, even among cannibals, the Western, “civilized” human (Alejandro) manages to look degrees more evil. But he was so over-the-top (did I mention the jerking off yet?) that it almost ventured into black comedy.

I feel like David Edelstein at New York Magazine/Vulture summed up how one should react to this film (and it made me chuckle), “The point is to feel something visceral, extreme. Eli Roth is extremely extreme. My head is off to him.” 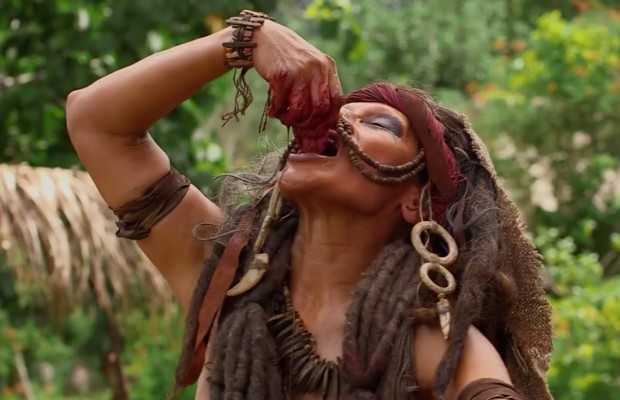