Disney opened the film on 1,230 screens in English, Hindi, Tamil and Telugu language versions and it debuted in third place with collections of $1.51 million, with the bulk of earnings coming from the English release.

Historically, all six previous “Star Wars” films have released in India to decent, but unspectacular, box office. A nation that has plenty of native mythology dating back millennia, including the epics “Ramayana” and “Mahabharata,” appears not to need a new Hollywood one.

So, India, another huge foreign market that won’t be treating Star Wars well. Just as a comparison, Jurassic World opened to $6.3 million in India and Avatar’s opening numbers aren’t available but it made $24 million there.

China’s been repeatedly noted as also not a strong place for Star Wars ahead of it’s Jan. 9 opening, but reportedly, the Disney marketing in China has been intense, so we’ll see.

But here’s Exhibit B: 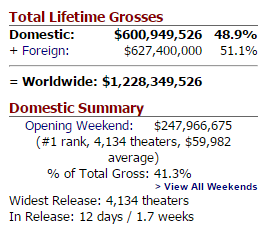 Let’s point out the spectacular first: Star Wars reached $600 million in 12 days. That’s 12 freaking days. Compare that to Jurassic World, which needed three times as many days — 36 days — to reach that lofty milestone.

But let’s look at the bad news:

The only other big money-maker that comes to mind with similar proportions is 2008’s The Dark Knight:

That’s pretty close to Star Wars’ damn near 50/50 percentages. If TDK had performed as well overseas as a lot of these other big blockbusters, it would’ve been easily one of the biggest flicks of all time globally.

In other words, imagine if Star Wars had Avatar’s damn near 30/70 percentage. That would mean it would be making like $1.8 billion or so overseas already.

So, my guess is that Star Wars, maintaining it’s near 50/50 percentage, will make almost $1 billion domestic and a tad more than $1 billion overseas for a world wide total of a tad over $2 billion. Which would be a good $700 million shy of Avatar’s global total.