Here is a slideshow gallery of my visit to the National Quilt Museum in Paducah, Kentucky. Please take note of the captions on these, as I wanted to ensure the creators received their proper credit.

One other big item on my list of things I did when traveling to Illinois was the National Quilt Museum. After seeing the Superman Museum, and then hiking through a swamp and surviving the murder hornets (lol), it was nice to scale it back and take in some art.

The museum is located in Paducah, Kentucky, and yes, to reiterate my concern over safety, I had my mask and kept my distance.

My hotel was also in Paducah, and when I was looking to see what was around my hotel, the museum popped up. I figured if it wasn’t too expensive, that would be a fun thing to go see. I appreciate art of any kind, whether it’s painting, photography, woodworking, cooking, writing, film, television, singing, and yes, quilting.

I don’t know anything about quilting. I wouldn’t know the first thing about how to quilt. I’m not particularly good with eye-hand coordination, so I imagine I wouldn’t be too good at hand quilting. I did take a sewing class in, I believe, the fifth or sixth grade, where we got to sew our own pennant flag. That was fun, but I was terrified of the sewing machine and wouldn’t remember how to use one.

Heck, I didn’t even realize that the technology around quilting has gotten so good, that you can essentially superimpose or incorporate an actual photograph onto the quilt. How cool is that? There were a lot of those kinds of quilts at the museum.

But again, I appreciate that someone can take an idea in their head, conceptualize it, execute it, and do so with … colored pieces of thread, scissors, a sewing machine, and so forth. It’s impressive. Like a lot of art, too, this takes enormous patience, I would imagine, and I also find that ability to patiently persist in creating the art impressive. And so I enjoyed the chance to really take in the art, and in many cases, read the explanations and insights from the creators.

Like any of the great art forms I mentioned, including quilting, the ideal is to make you feel something. Or, at least, to take your breath away. Or to make you think. If you can accomplish one, two, or all three of those feats, I think you’ve really pulled off something wonderful. The best of art is probably all three. In fact, the museum had a few quotes plastered on the walls that talked about art: 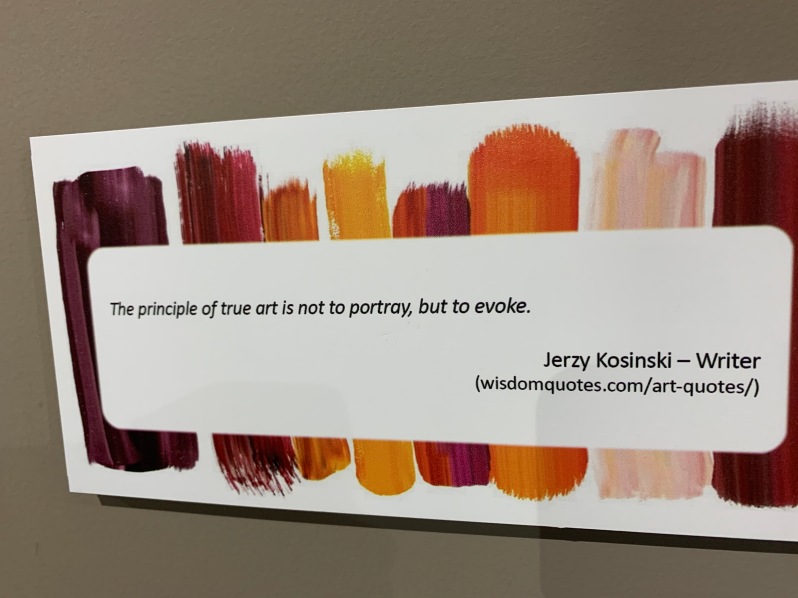 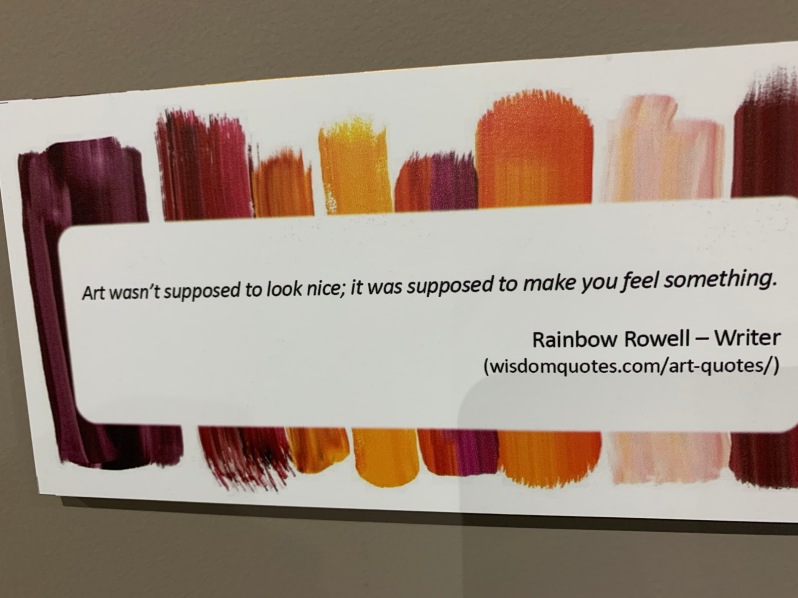 I love these sentiments and would echo them. I also think they are applicable to writing. I love language, and think perfecting the craft of language (or again, any craft) is important in a technical sense, but also, at the end of the day, art should evoke something in the viewer/listener/reader/etc. That’s why I’m rather vehemently against gatekeeping around art. If art makes you feel something, it doesn’t necessarily matter if it’s technically the best piece of art. Like the art you want to like, and create the art you want to create.

Anyhow, there are three big exhibits at the museum right now. First, there’s Rita’s Quilt, aka, Rita Smith’s unfinished quilt of all the states in the United States. She was 99 when she died, leaving the quilt unfinished, but fortunately, the quilt was found by other quilters who took up her cause, and late last year, it went viral. Now, it’s featured in a museum. That’s awesome.

There’s also the, “New Quilts from an Old Favorite: Wheel of Fortune,” quilts. These quilts stem from a competition around the world to interpret the old traditional Wheel of Fortune quilt pattern. My understanding of that pattern is that it’s based on the commonly used nine patch blocks (three patches by three patches) and one of the patches is an “interesting (and often forgotten) patch.”

One of the ones I liked from that series was Susan Mogan’s “A Fortune in Diamonds.” She said in her description that it was based on the Wheel of Fortune block, obviously, but also the Japanese concept of light and dark known as notan. To achieve the look in that one, she cut shapes out of a black square and then she “flipped” it onto a black background to bold, striking effect. It looks neat, and for Mogan’s effort, it won third place in the contest.

Additionally, there was also the, “What’s in a name?” series. One of my favorites from that was Erika Carter’s “Submergence.” She explained, “Submergence is one of my water quilts, suggesting through color the attractiveness of the ocean, the desire to explore its mystery. The depths hold our attention. However, not being a swimmer, I’ve experienced being caught underwater and needing to be fished out. The water’s surface was bright with sunlight, but, to me, unattainable. Yet, when I look at Submergence, I can imagine being surrounded by water and unafraid.”

When you look at, “Submergence,” you really do get the depth of the ocean effect. It works well in that regard. I also think the colors add to the effect of the mysteriousness of the ocean and the many “layers” inherent in the depths of the ocean.

Finally, there’s the OURstory: Humans Rights Stories in Fabric exhibit. This is one of the more bold sections of the museum since it delves into politics and messaging. For this exhibit, 46 artists from six countries created this collection of 62 quilts based on human rights. I enjoyed quite a few of these, but I will point out two of them, and save a third favorite for later.

First, we have Maggie Vanderweit’s “Love Anyway,” which is based on the creator having read Anne Frank’s diary. She was also a girl during WWII and her mother lived an hour’s drive from Amsterdam. “It could have been me, it could have been us,” she said. 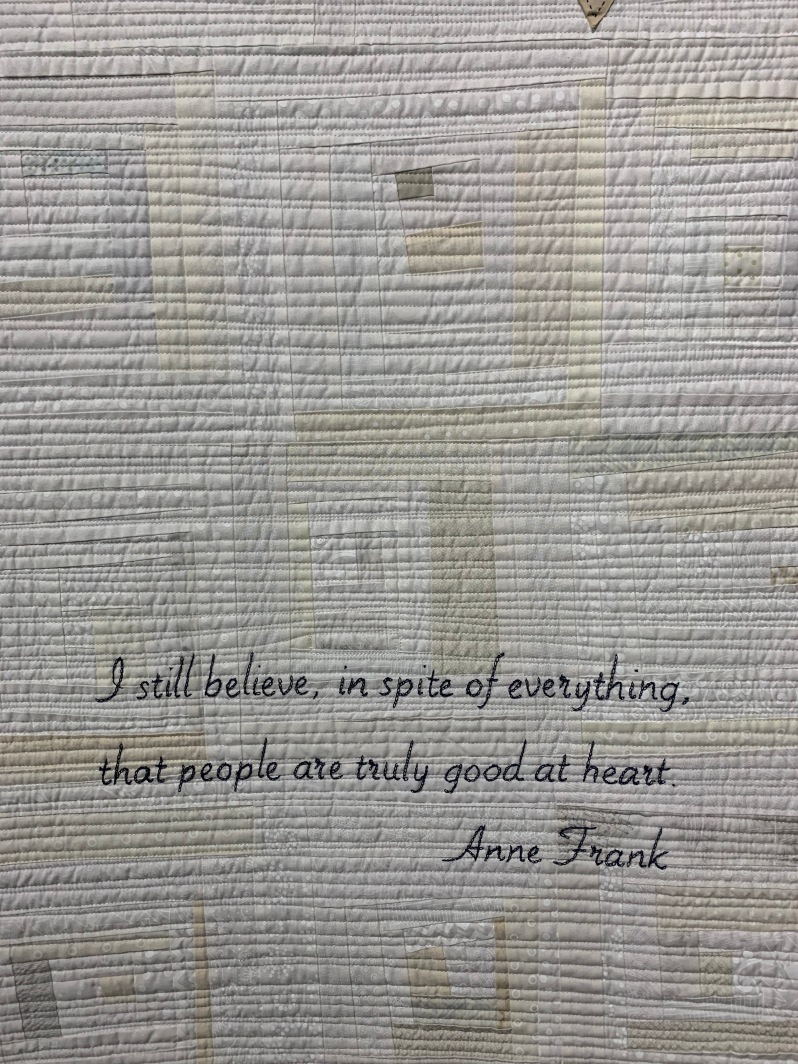 Second, we have Jayne Bentley Gaskins’ “The Glass Ceiling,” and this one doesn’t need much explanation of what’s going on. I love how it looks like a 3D effect, as if the fist is actually breaking through the glass and coming at you. Gaskins explained that she entered the workforce in 1971 and in a non-traditional female role at that. “There is still glass to be shattered before we achieve full equality,” she said.

When I finished my walk around the museum, one of the curators for the museum came near me (six feet!) and asked what my favorite piece was. At first, I was drowning in the sweat of my insecurity. Which one did I like the best? I don’t know anything about quilting. I almost froze. But then I remembered those earlier quotes about “feeling something.”

Whelp. The choice I ended up telling the curator was obvious:

That’s Phyllis Cullen’s, “Out of the Darkness,” about Elie Wiesel, the survivor, witness, and chronicler of the Holocaust. As Cullen explained Wiesel’s worldview, the “opposite of love wasn’t hate, but indifference,” and he sought to fight apathy. So, just reading that description, knowing what I already knew about Wiesel, the weight of the Holocaust, and the art work itself, all taken together gave me chills. It made me feel something. And my god, if you don’t feel something, I question your empathy. But that was only the beginning. At the end of her description, Cullen said, “Notice, first, the intensity of the great man. Come closer, see what emerges from the darkness.”

So, I looked closer.

That hit me hard and took my breath away. From a distance, you only notice Wiesel’s face, and assume the background is just that, a dark background. But upon closer inspection, you see the evils of the Holocaust represented. Whew.

If you’re ever in Paducah, Kentucky, spend $12 and check out this quilt museum. You don’t have to be a fan of quilts or have knowledge of quilts or be someone over 65 (that feels like the stereotype at least) to appreciate the artistry on display, and to feel the power of the artists and their art.