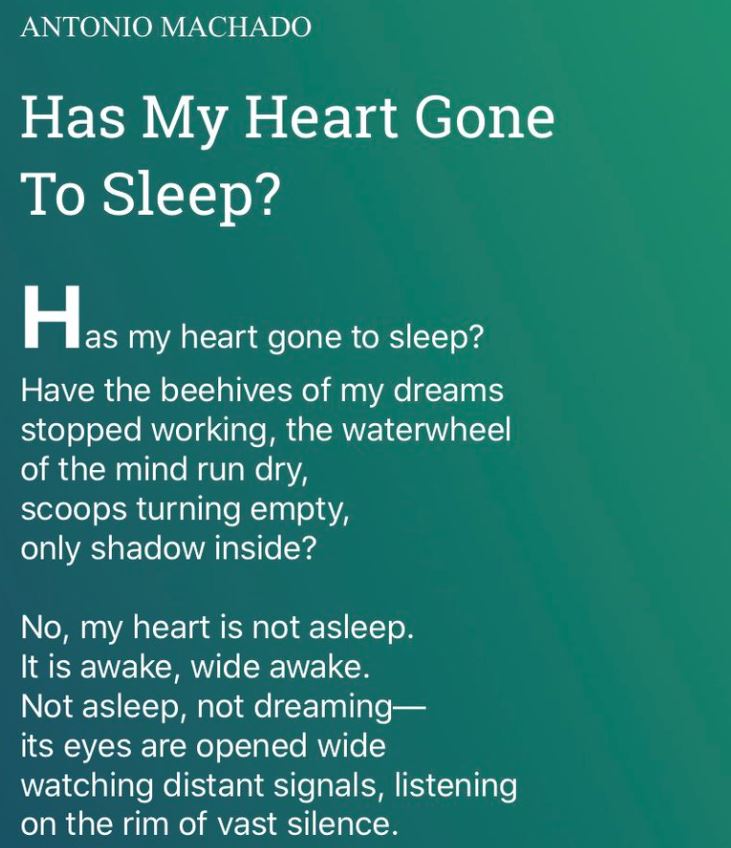 I was going through my Poemhunter app (which, minor rant, the app kinda sucks since it includes quite literally any poem, amateur or professional, and often they haven’t been checked for spelling/grammatical mistakes. As such, you often have to spend an inordinate amount of time swiping to find the good poems), and came across this poem by Antonio Machado, “Has My Heart Gone to Sleep?”

As I like to do, I Googled Antonio Machado since I liked his poem, and it turns out, he was one of the Spanish poets as part of the Spanish literary movement known as the Generation of ’98.

That’s 1898, coinciding with the Spanish-American War. I’m not a Spanish history buff, and I don’t need to go over all of the history I’ve Googled to set the context here, but it is pretty interesting, if you want to read it. The main two themes I’ve gleaned from scouring the history is that the poets and playwrights had a sensibility of trying to push Spain both beyond its ruin (in the aftermath of the war and other political strife) and into modernism through a romantic lens. But also, they sought to keep their words reflective of the common man in the true spirit of a revolutionary.

I feel like this poem captures some of that newfound ethos because he’s intimating that he’s restless, that he’s full of energy, and quite frankly, that he’s alive. There is no sleep for the restless heart.

The line that most strikes me from this short poem is the last line, “Not asleep, not dreaming — its eyes are opened wide watching distant signals, listening on the rim of vast silence.”

What do you think that line means?

My interpretation, particularly given the context I now understand Machado to be writing in, I see it as him saying his heart is wide awake, eyes peeled, and ears opened, to see if other hearts in the heartland are awake, too. Are other hearts ready to be revitalized in this country? To forge ahead anew? Where’s your signal, if so?

So far, I hear only “vast silence.” This poem is its own siren song to other hearts listening, or perhaps waiting for that revolutionary figure to step up.

Whatever the intention Machado had with this poem, I appreciate the simplicity of the imagery and the words. If they were aiming to appeal potently to the common man, mission accomplished.

For those who want to read it in Spanish, I used Google translate, so apologies if it’s not a great translation.

Heart in Spanish, “corazón,” is pretty. And there’s something even weightier, more striking, about silence in Spanish, “silencio.”

Let me know if you like this poem, and if you’re familiar with his other poems, which ones do you like?