So, I’m doing a re-read of the Harry Potter series and reviewing each book as I go along because I LOVE THEM and here are my reviews for books one, two, three, and four, respectively, if you missed them. Spoilers abound in those and beyond this point, obviously.

The fifth installment in the Harry Potter series is the longest book of the series at around 860 pages and I find that among fans, this book is often the least liked for that particular reason, as well as for this one…

As in, the horrible, horrible, horrible, horrible, nasty, disgusting woman known as Dolores Umbridge. Yeah, Voldemort is He-Who-Must-Not-Be-Named and he does many wicked and evil things, which makes him the true villain of the series, but my god, Umbridge is memorable as that very human, very real villain we all know in our lives that we just want to strangle because they make life utterly miserable. She is just a great, great character that you want to hate. Hence, my reaction when she first pops up:

The way she treats Harry especially, but just anyone in general at Hogwarts and elsewhere is frustrating. She makes Harry repeatedly do detention where he uses a magical quill, which literally siphons his own blood from him by writing into his hand, “I will not tell lies.”

Because that’s the gist of this massive book: Harry Potter witnessed and freaking fought Voldemort last year (in the fourth book’s conclusion), but the Ministry of Magic does not want to believe him, so they, along with the media, The Daily Prophet, set out a propaganda campaign to discredit Harry, Dumbledore and anyone that dares thing Voldemort is back. Even worse, the Ministry sends Dolores to Hogwarts to gradually take over the school with her ridiculous rules, bans, detention and curriculum. She’s the new Defense Against the Dark Arts professor, but she doesn’t want them to learn any defensive magic, as she feels there’s no need for that. The subject is purely academic. And thus, she has this exchange with Hermione: 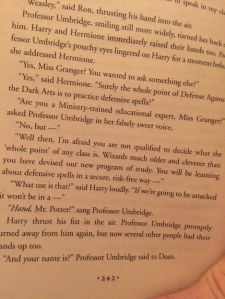 And I’ve had a similar exchange — minus the wizarding stuff, ya know — with a professor before when I argued against Miami’s Miami Plan, which is the curriculum Miami feels each student needs to take, as in, so many courses in these different subjects. “Well, people much smarter than you…blah blah.”

Anyhow, the cool part of this book is that to go against Dolores, Harry begins teaching Defense Against the Dark Arts to fellow, interested students right under Dolores’ nose. It’s great.

Meanwhile, Voldemort is playing up the Ministry’s unwillingness to admit his return by trying to steal a secret prophecy that foretold Harry’s rise. The prophecy stated that either Harry or surprisingly, Neville, would one day defeat him. So, naturally, once they were born, he set out to kill them. He picked Harry and the rest, as they say, is history. Anyhow, he wants to see this prophecy again, which is in the Ministry of Magic.

But he has to lure Harry there, which he does, which then leads to Harry’s godfather, Sirius Black, getting murdered. So, great, his parents were killed and now his godfather. Dammit, J.K. Rowling! We barely had any time with Sirius. But I understand why it had to happen, as the last two books will demonstrate.

And of course, Dumbledore is being the bad-ass that he is. At one point, the Ministry of Magic aims to arrest Dumbledore because the Minister of Magic, Fudge, thinks Dumbledore has plotted to take over the Ministry with his “army,” which is really just Harry’s Defense Against the Dark Arts private lessons. Instead, Dumbledore says, no thanks guys. It’s one of my favorite scenes in the entire series. 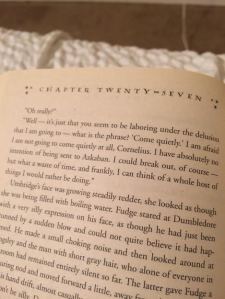 All of which brings us to the battle at the Ministry between Harry, Ron, Hermione and some other of his friends against the Death Eaters hell-bent on getting the prophecy for Voldemort. It’s one of the most action-packed scenes in the entire series up until the final book. And it doesn’t disappoint. The Ministry is just an interesting place.

But I’d be remiss if in this review I didn’t mention one of the moments in the series that without fail always makes me cry: 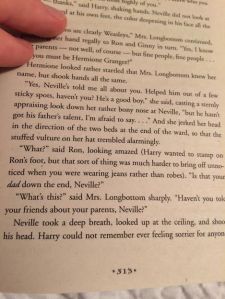 Voldemort had Neville’s parents tortured into insanity, so this is the scene where the rest of the gang finds out about Neville’s parents and it’s just devastating. The dude keeps every wrapper his poor mom gives him. Ugh. I can’t handle it.

This is just a great book because it’s again, more and more mature than the previous installments as the characters get older and the readership likewise gets older. But it also touches on themes of government propaganda and lies, media manipulation, romance, parent-child relationships and so on. Not to mention, with Dolores, a question about education and its purpose and government meddling. Plus, now the stage is set for the sixth book, as there was a fundamental issue explained in the prophecy by Dumbledore to Harry:

In other words, Voldemort or Harry must kill the other, so now the stage is set for the ultimate battle of good versus evil. I love it. And what a burden to put on a 15-year-old.

“Just because you have the emotional range of a teaspoon doesn’t mean we all have.” – Hermione, in a hilarious quip to Ron

“Indifference and neglect often do much more damage than outright dislike.” – My guess is this one’s from Dumbledore

– Professor McGonagall, in perhaps her best moment of the series

“You care so much you feel as though you will bleed to death with the pain of it.” – Dumbledore, to Harry after Harry throws a spectacular, much needed temper tantrum at the end of the book in his office

“Yeah, Quirrell was a great teacher. There was just that minor drawback of him having Lord Voldemort sticking out of the back of his head!” – Harry’s show of sarcasm is always great and this is one of the better ones

– This exchange with his aunt and uncle takes the cake for hilarious Harry sarcasm quips.

“Youth can not know how age thinks and feels. But old men are guilty if they forget what it was to be young.” – Another wise Dumbledoreism.

“According to Madam Pomfrey, thoughts could leave deeper scars than almost anything else.” – Harry, I think, and that’s deep (no pun intended…)