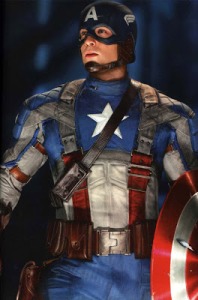 Here he is a year later in Marvel’s The Avengers:

And finally, here is a photo of him from the upcoming sequel Captain America: Winter Soldier:

So, what’s the deal here? Why does his red keep disappearing with every subsequent iteration of the costume? Personally, I think the costume from the first stand-alone film is the best. He looks appropriately balanced in color and tone.

The shot from Captain America: Winter Soldier isn’t particularly aesthetically awful, but it’s just so…blue. I’m not sure what the creative impetus is behind altering his costume from film to film, but I think Marvel should have gone with the old adage, “If it ain’t broke, don’t fix it.”