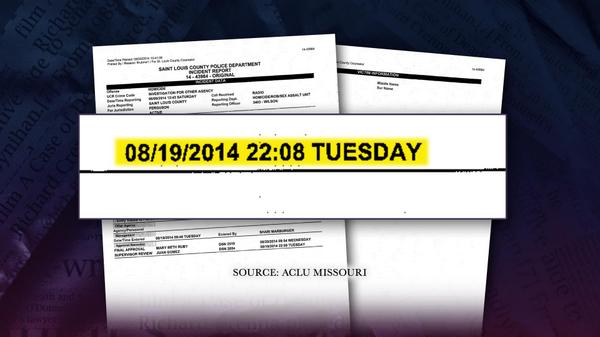 Above is the police report filed to the St. Louis County Police Department regarding the shooting of Michael Brown by Officer Darren Wilson. Courtesy of MSNBC, the crucial bit of information has been highlighted: 08/19/2014 22:08 Tuesday. What does that mean?

Well, first, you should know that Ferguson police never filed a police report detailing what occurred between Darren Wilson and Michael Brown. Then the St. Louis County Police Department took over the investigation. The shooting occurred on August 9, 2014, a Saturday. As you can see highlighted above, the report provided by the ACLU Missouri wasn’t filed until ten days after on August 19, 2014.

Moreover, there’s a list of police dispatches from the day of the shooting, right after the shooting in fact. And they concern calls for more back-up for “crowd control.” An officer-involved shooting that led to a homicide and they’re dispatching for “crowd control.” Which to be fair, I get that it’s a crime scene and they need to ensure it’s not tampered with by what by then was a growing crowd of angry residents.

Apparently, it’s common protocol in an officer-involved shooting, according by police union reps, to not file an incident report.