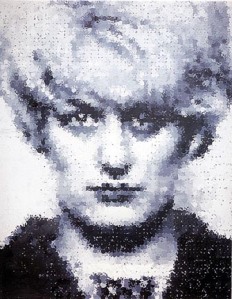 “There are works of art on display . . . which some people may find distasteful. Parents should exercise their judgment in bringing their children to the exhibition. One gallery will not be open to those under the age of 18.” Such was the disclaimer accompanying the Sensation exhibit of Young British Artists (YBAs) hosted by the Royal Academy of Arts in 1997. The controversial exhibit from Charles Saatchi featured the painting Myra by Marcus Harvey, which he had completed in 1995. He also had two other artworks featured in the exhibit, but it was Myra that garnered the most attention and controversy. The catalog for the exhibition had this write-up on Marcus Harvey, “Marcus Harvey makes disquieting, tension-filled paintings that simultaneously contain and exceed their salacious imagery. Through the superimposition of pornographic female nudes on to a wildly expressionistic ground, form and content resist and comply with each other uneasily.” Tension would indeed abound over his painting.

The artwork was created within the context of British sensibilities. That is, the sensibilities the British have – or rather, the word “aversion” is more appropriate here – to the widely publicized mug shot of Myra Hindley, a woman, who along with her lover, Ian Brady, killed and tortured children in the early 1960s. Duplicated in newspapers and magazines countless times, the mug shot had become pervasive in the British consciousness. Even three decades after the murders there was much derision about Myra Hindley. Thus, Harvey, already doing work which pushes boundaries regarding sexuality, constructed a portrait painting of Myra Hindley and it was laden with controversy from the onset. Moreover, the 1990s became the paradigm shift in Western culture for alternative artistic expressions. For instance, in the United States, metal bands and long hair gave way to Nirvana and grunge music. In Britain, led by the YABs, there occurred art revitalization due to boundary-pushing and new forms of artistic expression. Essentially, the 1990s for most Western countries was a period marked by abundant peace and prosperity, which enabled more time to be had shaking the cultural norms.

Harvey’s painting appears reminiscent of the 1966 mug shot of Myra Hindley featured in newspapers because it is a reproduction utilizing plaster molds of an infant’s handprint to create an acrylic portrait of Hindley using a monochromic technique to duplicate the black and white original. At nine by eleven feet, it is an enormous piece of work, which from afar seems a glaring portrait of Myra, but on closer inspection, the handprints are noticeable. The aforementioned inspiration for the painting, Myra’s mug shot, is often seen as the embodiment of feminine evil. Peter Stanford says of it in The Guardian, “That Medusa-like snapshot, taken in 1966, with peroxide hair swept up and back and a fixed, almost defiant, look in the eyes, became an icon of crime.” Ultimately then, this iconography of notorious British crime being constructed out of the molded handprint of an infant tested and breached many British people’s sensibilities. Therefore, the main similarity throughout the work is the use of handprints to comprise the piece. Additionally, the monochromic coloring gives it a cold and unapproachable feeling. As such, the primary points of emphasis in the piece, Myra’s eyes, are accentuated as to be discomforting. If one notices, her right eye stands out tonally from the rest of the painting because it is lighter than the surrounding handprints.

In the aftermath of the YBA movement and the notoriety his painting received, Harvey felt people misconstrued his motives for doing the painting. As mentioned, prior to the showing of Myra, Harvey was already doing female paintings, which were also constructed out of handprints. “The thing that no-one got was that it was my hands making the handprints – it reflected my interest in the manipulation of paint in a sculptural sense. The furor sidelined me as a shock merchant.” In a sense then, Harvey wanted to manipulate the oft-printed Myra mug shot to make a statement. And since it is a reproduction of the mug shot there does are some clichés primarily about the 1960s and women. That is, Myra has the bouffant and peroxided hairstyle, which seems influenced in part by Jackie Kennedy, the first lady to President John F. Kennedy, and Marilyn Monroe.

I think there is a definite sense of tragedy associated with this piece, as far as expressive qualities are concerned. As art critic, Jennifer Friedlander suggested, there exists this juxtaposition between the tiny handprints of a child with that of the “depraved human world.” In other words, there’s also a sense of tragic irony that a child murderer would have her portrait constructed out of the tiny hands of an infant. Certainly too, beyond the tragic elements, there’s a potent sense of coldness and foreboding associated with the piece. For one, it’s gigantic and as such, imposing. Secondly, the tiny handprints comprising the portrait created this pixelated quality that also asserts this sense of detachment on one hand and paradoxically, this need to get closer on the other – it’s pixelated, so to see it more clearly, one moves closer, which then enables a better view of the tiny handprints. Thirdly, since the mug shot has permeated the British consciousness for decades, there’s an inherent duality involved wherein there’s equal parts recognition and revulsion.

There was an obvious outpouring of disdain for Hurley’s painting and to be honest, I cannot relate to that. For one, I’ve never personally been offended by any artistic expression, but secondly, I haven’t experienced losing a child, so I cannot know what the victims’ families felt experiencing this painting. Essentially, it’s difficult to gauge whether this painting gravitates more towards exploitation than artistic expression. More or less, one person’s exploitation is another person’s expression and the reverse holds true. In any event, as a student-journalist, I definitely extrapolate meaning from this painting as a commentary of sorts on the proliferation and sensationalism surrounding serial killers. The British media continued to print the mug shot decades after the fact until it was ingrained within the culture. From an ethical perspective, perhaps that’s going too far; perhaps the media is the exploitative one and Harvey is merely perpetuating that message

I keep going back to this juxtaposition of a child murderer’s portrait being made of an infant’s handprints, but I feel as if that is the defining quality of this painting that makes it a success. It makes the painting thought-provoking, certainly provocative and condemnation of media sensationalism and adult cruelty. Moreover, that unique way of constructing it, even though it’s a replication of a photographed mug shot, still makes it an original piece. If he had merely painted a replication of the mug shot, then I would not conceptualize any redeeming value. The task is not an easy one; consider, the image had been around for decades, so Harvey had to do something different and evidently, conjuring an image out of infant handprints was the necessary spark.

I had a discussion with my uncle about this painting. His gut reaction was that this painting was exploitative and shock art for the sake of garnering attention. Of course, he already has a preference against macabre works of art, which may have influenced that gut reaction. I, on the other hand, appreciate and gravitate towards the macabre and the controversial. As such, my gut reaction isn’t revulsion or condemnation of the painting as exploitative, it’s curiosity. I was going to do the criticism paper on Piss Christ by Andres Serrano, but then I read the backstory for Myra, the killings and it intrigued me far more. However, that personal preference aside, objectively, I still see Harvey’s painting as a work of art. He managed to create this painting, which replicates the mug shot, out of a mold of tiny hand prints. Additionally, the monochromic coloring gives it a cold and callous tone that compliments the perception of Myra, anyhow.