On a forum I frequent, someone replied to a thread about the NSA spying espousing why they are apathetic to the leaked information and why that’s okay. Essentially, the point boiled down to the idea that the issue is abstract and not palpable to day-to-day living like jobs or the economy in general is. Moreover, it’s actually a reflection of how good our society is that we can be apathetic. Here was my response, which I hope serves as a good defense of why things like the NSA spying matter, but I believe my defense can be more broadly applied to most other so-called abstract issues:

I do agree on it being an abstract issue that’s not palpable to the “here and now” like say, jobs, gas prices, health care and food-on-the-table type issues. However, in this situation, the only way I can make it more concrete and erode away your apathy is to appeal to your sense of empathy and humanness. There is a plethora of issues where you could distill them down to simply, “Well, this doesn’t impact my day-to-day life.” But why should you? As far as I can tell, someone committing suicide in California doesn’t impact me. Neither does an American soldier being blown up in Afghanistan. A schoolteacher’s rape in Maine doesn’t impact my day-to-day living either. Certainly, neither does a burglary in Texas or a drunken driving accident in Maryland. In fact, police abuse in Las Vegas doesn’t affect me much at all either. Neither does the corruption in Detroit or Chicago politics.

Do you see my point? Even if you took most of those applicable issues and put them on my local news feed, they don’t truly impact me. I’ll watch it that night and clock into work in the morning like nothing ever happened. Yet, I still care about them and the only way I can care about them is in the abstract via empathy, humanness, and more to the point, principles. Because those issues matter and if I only started caring once my brother-in-law’s blown up in Afghanistan or my local police abuse my rights or my sister gets raped or whatever, then how principled am I? How empathetic am I? How narrow am I to only view things inasmuch as they affect me personally? I don’t mean this as a knock on you at all; I’m making my case for these issues being palpable. It’s the same reason that while I’ll obviously applaud Senator Rob Portman for coming out to accept gay marriage in light of his son being gay, but that I’ll wish he had not needed a personal influence to simply be empathetic and principled.

To put it a bit more succinctly, that’s what living in a democratic society is about — looking beyond your own purview of issues. So, sure, it’s unlikely that they’d ever use that data to look at me or you or any of us, but as far as principles go, doesn’t it still matter that a small number of people hold such vast power? And that maybe someday, those wielding the power won’t be so benevolent? Sure, that’s a slippery-slope argument, but I can’t think of a more apt situation to apply it towards.

“You can call me when the issue of the day is a something more important.” That goes back to the slippery-slope argument and maybe some view it as hyperbolic to say this, but at that point won’t it be too late? As I said, the point of a functioning democracy is an active, engaged, and informed citizenry that holds government, big business and the powers that be accountable and transparent. These things should matter.

I suppose you’re right, though. Americans and other citizens of Western nations (for the most part), aren’t going to be taking to the streets to protest this because they do — for the most part — live very comfortable lives. Or even beyond that, they can’t afford to take the time to go protest. In any event, I see that as a problem, not as something to be applauded. A line I often hear, “You don’t notice your liberties until they’re gone.” I find that to be apt. 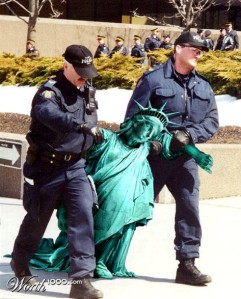