That unsubstantial death is amorous,

And that the lean abhorred monster keeps

Thee here in dark to be his paramour?”

Somebody died. Don’t worry about it. A lot of people die, every day. From being fat fucks. Shot, stabbed, drowned, natural disasters, aborted, whatever.

This one was Eloisa. Brain aneurysm while she was taking her kid to a soccer match. Felt sick, drove him, and didn’t even make it out of the car. Hell, she didn’t even get the seatbelt off. At least, that’s what I heard some dudes saying by the willow tree, chain smoking.

Her obit said she was a “secretary to Jameson and Jameson’s Law Firm, mother of one, Elizabeth,” and other sappy shit some college intern wrote up with a hangover. I just took note of the address for the service, jotted it down in my notepad, and put on my slacks.

And here I am.

At a funeral, nobody asks who you are or your relation to the deceased. As long as you don’t smile too much, they think you’re a relative or friend or coworker. You don’t even have to dress formal. Throw on a pair of jeans and a Raiders hoodie and someone will think you’re just a poor schmuck, unable to afford the right attire.

The point is, fit in, don’t fit in, mingle, don’t mingle, it doesn’t matter; nobody questions you at a funeral.

Brain aneurysm meant open casket. It wasn’t like she was beaten to death or took a shotgun up the nose. This was good news for me. Jeremy’s last week was closed. Roller coaster accident. Only a few of those a year, so I guess he won death’s lottery. Jillian the week before that. Drunk driving, much more common.

Around noon, the eighty or so people that turned out filed into the church, Catholic stylized with an ornate, enormous steeple that stretched far into the purple hued sky; she must have been Catholic, or said she was. One of those churches that looked like it was carried over from an old town in Europe.

Lepers of society won’t get eighty people at their funeral. Snort a bit too much coke? You get a disappointed, weeping mother and a pastor going through the motions. Die from AIDS as a streetwalker? Fellow streetwalkers may come, may not, otherwise. Robbed a bank at 17 and die in prison at 30 from a shanking? Prison service, nobody cares.

Inside, people were signing the guest book. I stuffed my hands in my coat and kept my head down. I mimicked the sniffles of the woman two ahead of me for an added touch. Then, I was the next in line, behind an elderly woman.

She turned to me and spoke with an Irish accent, “Beautiful, she was. Even as a kid, we knew she would be.” Her eyes fixated on her secretarial portrait, taken after she accepted the position. She was in a black blazer, brunette hair permed, and an Irish brooch on her left breast.

“I gave that to her. Long, long time ago,” the old Irish lady said, and she pressed a tissue to her eyes. I said nothing.

I took the gold pen and looked at her name, Eva. The letters were grand and elegant. I scribbled my name underneath, Reese, sloppy and disjointed.

Eloisa was gorgeous, if you’re into that business professional type.

The line waiting to pay their respects at the open casket curved around the inside of the church and spilled into the front lobby. I was just outside the large oak doors. I could already feel my dick tingling, as I gazed ahead at the cherry walnut casket. A funeral hand had done a good job waxing every inch of the surface; it glowed on this dim day.

Sniffles and coughs provided the ambiance. Men kept their hands deep in their pockets, heads down, shoulders around their crying spouse or girlfriend or sister or daughter. A small contingent off to the side stood out as the ones not afraid to laugh at a funeral. Perhaps they shared a funny anecdote about Eloisa. The funeral director stood off to the side, arms folded and he held a sincere smile – or at least, sincerity rewarded handsomely with old Irish money.

I throbbed harder and harder as we did the funeral march toward the casket. My chest had that fluttery feeling you get when you meet someone new. You’re clicking and talking fast because you’re afraid the moment will end. Or that it is all a mirage. I couldn’t take it.

There was a bathroom near the entrance I saw earlier. I pushed passed an obese man coming at with a walking cane, a heart attack obit to come. I went to the far stall. I fumbled and then latched the door with sweaty hands. I sat down on the toilet, pulled down my black slacks around my ankles and wrapped my hand around my throbbing penis.

Janice, from a few weeks ago, had looked like an angel on the plush velvet lining in her casket. If I hadn’t known she was dead, I would have thought she was sleeping. She was decorated in ruby red lipstick, gold chain around her neck and fake ruby fingernails. The fingernails did it for me.

They wanted you to get off to this, why else put a dead body through all the beautification? Someone worked damn hard to give Janice a shower, clean her hair, touch her skin, apply the lipstick, dress her…

I turned and climaxed into the toilet, used a wad of toilet paper to clean my hand and flushed.

Zipped slacks, shirt tucked and ready to go, I came back to the lobby. The throngs of grievers were gone. The doors were closed. The sincere smile funeral director stood in front of them.

“I thought there was, what happened, isn’t there an open casket?” I stammered.

He looked at my pale white, sweaty forehead and seemed alarmed, but only a second; the sincere smile returned.

“Yes, there was, sir, but it has concluded. The service has begun. Did you want to go in?” he said.

I turned and left through the church doors. Fuck. The best chance in weeks and I blew it, goddammit.

On the way home, I picked up a newspaper. 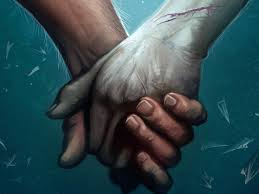