(Here’s a story that was rejected by two different editors and I agree with both of them on the rejection and their generous feedback explaining their rejection, but, nonetheless, there are elements of it I dig and it’s nice to post some new flash to the blog here. Nothing has been altered.) 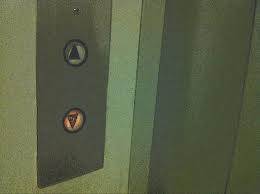 Push the button. Up, down. Who cares, just push it. But it’s dirty and fingerprint-smudged.

I pull out the canister of Clorox Disinfecting Wipes I keep in my Gucci briefcase. Lather the Up button, then push.

Step into the elevator. Empty. I breathe. Again. And stay standing in the middle. The walls and the railing are a goddamn Petri dish of human virus. Infected air molecules swell under my nose. Smells like a janitor’s mop bucket, a hodgepodge of dollar-saver, diluted cleaning chemicals.

To the top, I go, because everything is at the top. That’s how the world works. This metal box is no different.

On the third floor, the elevator stops, chimes, and the doors slide open. A man with broad shoulders and sculpted biceps under a thin blue button-down shirt walks in, carrying a Diet Soda and a cheeseburger in his hand.

Seriously. He has a cheeseburger in his hand. No wrapper. Negate attraction. I can see the grease coating his fingers, the ketchup dangling from the edge of the patty and a pickle slithering out from under the bun. His greasy finger extends outward and touches for floor five. Jesus fuck.

I back up to the corner to give him breathing space. Or myself, rather. From the inside pocket of my Gucci, I pull out my Microtech UTX-70 switchblade. Smallest, most efficient model they carry. Reliable. Get a cheap one and you’re liable to have the spring catch. No good in situations like this. The aluminum handle was light, which meant it is good for fast swiping. The makers advertised it as being able to “withstand any obstacle.”

Good, because right now, I have a pretend-fit fuck standing in front of me masticating on cow scraps.

He has a receding hairline, but just enough growth in the back to grab onto. I do. I rear back on it, exposing his Adam’s apple, and click the UTX-70 open, sliding the blade across. Blood splatters against the elevator doors and the buttons. Bloody buttons. The man shakes the metal box, as he falls to his knees, dead.

That quick. From the bubbling sensation of compulsion to the gratifying conclusion of action was sudden. I liken it to how a dude must feel when he prematurely bust his load just gawking at my pantie line.

With another wipe, I stop the elevator mid-air. I can’t go into an interview with a body by my feet. Fourth floor’s clear. Under construction. That’s the kinda thing you check, if you wanted to be prepared, even if you’re unprepared.

Most of the blood is on the elevator doors, but some’s on the velvet carpeting. Almost blends. Almost is not good enough. First, the body.

Body is heavy because the guy had a muscular frame, not because he’s dead. A dead body weighs as much as a live body. Dr. Duncan MacDougall’s 21 gram soul findings was junk science from a turn-of-the-century puritan. Means nothing.

His still agape mouth makes ample space for ridding of that cheeseburger menace. Then I drag the body across the threshold and around the corner in front of the men’s bathroom. By the time anybody finds the body, I’ll be a wisp of smoke.

To attend with the floor. A metal tray with a tool kit sits near the elevators. Must be for the illegal day laborers. I push it into the elevator over the blood spot. Not a perfect fit, but enough for now. Doors are easy enough. With the wipes, I clear away the blood until I see my reflection.

Modest five-inch heels, beige pantsuit and hair in a ponytail. Guys were threatened by women when their hair was loose, unhinged.

Hand sanitizer to my palms, in between my fingers, under my fingernails, three times, four times, and five times. Good enough. One more time. Okay.

Check Gucci. No wrinkles on my resume paper or blood. But I had two back-ups, anyway. Notebook, pen, just in case.

Push the button. Up. Top floor. Gotta go up, and keep going up, even for those like me.