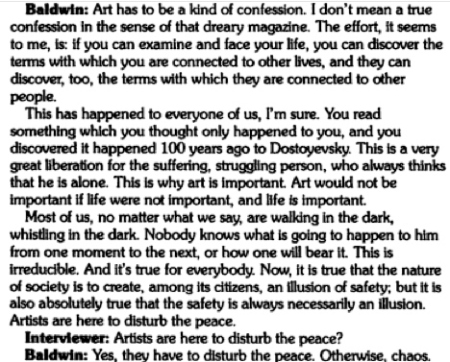 As it happens, I sometimes get lost in a daze of reading Goodreads quotes for hours on end. One such person that I’ve been interested in lately is the writings of James Baldwin. In particular, I came across the above exchange and it’s one of those things I couldn’t help but read a few times because it resonated with me. And when something resonates with me, especially within the area I’m interested in — writing — I have to…write about it. Here we are.

This is just my own musing, but it seems to me, especially within the last decade or so, the role of the artist in society has been devalued and underplayed to such a large degree. If you go to college and major in any of the fine arts, you’re lambasted for being fucking stupid. “Why would you waste thousands of dollars for such a meaningless degree?” If you say you want to make a living being an artist, people either patronize you or outright tell you how foolish that is. The days of the romanticized life of an artist are over. To be an artist is to be stupid. Go be an engineer. Go into politics. Jesus, do anything other than artsy shit. What are you, a loser?

But Baldwin gets at the reason artists are so vital to our society, whether we’re talking painters, musicians, writers, filmmakers, comedians, whatever medium you want to discuss, artists matter. They shake up the established order, the status quo and speaking to Baldwin’s point about the illusion of safety, they say, “Dude, wake the fuck up and check this out.”

Artists are risk-takers, their canvas a megaphone and what they produce “disturbs the peace.” Disturbs this illusion of peace. Where we would be as a society, as the human species, without artists? Am I hamming this up too much? Over-exaggerating? I don’t think so.

I especially find his point about the connection forged through art salient. Inevitability, given who we are as creatures, we believe every problem we have to be personally our problem, without being able to see that a great many people alive, dead, also suffered through those same problems and some even spoke to it in their own way; it’s the human condition.

As to the point about artists using their work as a sort of “confession,” he says it even more forcefully here, “All art is a kind of confession, more or less oblique. All artists, if they are to survive, are forced, at last, to tell the whole story; to vomit the anguish up.”

Right? Maybe I’m romanticizing it too much, but the true mark of an artist to me, the true measure of artistic excellence, comes from the artist bearing all. They fucking bleed on to their canvas. They give it everything. Nothing is left untouched because only when one is willing to bleed does the “illusion” break down and we start getting at the grit of the human condition. That grit that we try to avoid with our 9-5, our IKEA furniture, our Starbucks coffee and then BAM, motherfuckers like James Baldwin come around and say things like, “The American idea of racial progress is measured by how fast I become white.” That smacks your historical and present-day illusions right in the face. I love it.

I’ll end with one more quote from Baldwin:

“Perhaps the whole root of our trouble, the human trouble, is that we will sacrifice all the beauty of our lives, will imprison ourselves in totems, taboos, crosses, blood sacrifices, steeples, mosques, races, armies, flags, nations, in order to deny the fact of death, the only fact we have. It seems to me that one ought to rejoice in the fact of death–ought to decide, indeed, to earn one’s death by confronting with passion the conundrum of life.”

Poignant as hell, but that’s what I want to do. I want to use art — writing — to autopsy the the goddamn conundrum of life, the burden of living. I’ll see what I can do to bring a little chaos to the world, to disturb the peace.  To earn my death.

4 thoughts on “Artists Exist to Disturb the Peace”