(I forget now where I saw this connection made between MLK and a mascot — it was on Twitter, obviously, but I forget the attribution. My apologies. It was a brilliant connection that sparked this blog post.)

So often when high-profile, mainstream issues surrounding race come to the surface and often when riots accompany those tensions, Martin Luther King, Jr. is evoked as a sort of respectability pacifist mascot. From city officials to police chiefs to those on the right (and the left) to everyone in between, MLK is prostituted around as this mascot of nonviolence, as the answer to every racial eruption, as the way to cork the bottle again. He’s the stop-gap in racial violence.

But let’s parse out the bullshit and call it for what it is. Maybe not all the time, but reading between the lines, it seems to me when people are using MLK as mascot, they’re really saying, “Why can’t you unruly niggers be more like your leader?” Well, there’s a few things wrong with that. I’ll point out some of the obvious ones:

The real issue is the falseness behind it. If I just evoke MLK, then I’ve done my due diligence as engaged white man. Call for peace. Peace is good, right? It depends on the type of peace you’re referring to.

One of my favorite MLK quotes, in fact, is from his “stay” in a Birmingham prison: 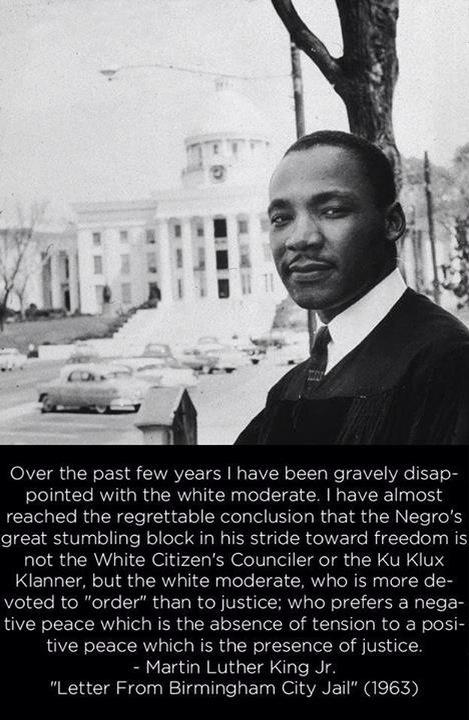 This mantra and fallback to “order” or put the other way, “law and order,” is usually heralded by conservative types, but it has much currency among a majority of white Americans, otherwise the current status quo of mass incarceration and the War on Drugs would not continue as is. The culture and cult of police unaccountability would not continue as it is.

It’s been said time and time again. Black people can continue to have their blood spilled in American streets. Black voices can continue to wail into the night. But, unfortunately, it matters not — in terms of actually fundamentally changing the structures and institutions which enable it — until the “silent” majority of white people, the white moderates, starts giving a shit about it.

As I said in a Tweet, those with the power do not just give it up. They may leave bread crumbs of power conceding bits of it here and there, but by and large? They aren’t gonna just give it up. Either the blood spilled must become so egregious as to awaken the conscious of the white man or the abuses must start slipping over into the white realm to matter (which it already has, there’s well-documented cases of egregious police abuses against white people, too).

On the journey to that time, please, for the love of God, stop using King as a mascot. It’s hollow bullshit.