Altruism never seemed harder, more controversial and even criminal than it does in The Overnighters. Jesse Moss’s 2014 documentary film follows ambitious men looking to capitalize on North Dakota’s oil boom, only to find themselves homeless.

Fortunately for them, they come to find local pastor Jay Reinke’s magnanimous church-led program, “The Overnighters,” where after a background check, questioning and so on, people can stay on the floor in the church or sleep out in the parking lot. Over a two-year span, some one thousand people did this. Some even slept in his home with his wife and three children.

Some get back on their feet, some don’t, people are generous, some aren’t, and the story ends happily.

Ha, if only. As Reinke comes to find out and says, “It does amaze me that giving people floor space is provocative.”

It is because of small town ethos where the “outsider” is deemed scary, criminal and a disrupting influence. It doesn’t help that the local newspaper ramps up the fear of the small town with headlines linking the outsiders to crime.

Yes, some of them have criminal backgrounds involving drugs, violence and yes, even sex crimes, but that, especially in the eyes of Reinke, isn’t enough to deter him from offering a second chance and a place to fucking sleep at night.

In one scene, Reinke is going around house-to-house to pass out fliers about a community meeting regarding the Overnighters and one man, off camera, calls them trash. Reinke quips that such dehumanizing was funny coming from an old man with no teeth living with his daughter.

But the outsider caricature is such a powerful trope in a society that even the authoritative image of a pastor in a church can’t compete with it. The collar is no match for the fear caused by the outsider.

These men came from all over the country (and even the world) for promise of a better future, only to be regarded as scum and trash.

Reinke is flabbergasted throughout the film at how these men are treated and he just wants to help them. Of course, the film is far more complex than the image of Pastor Savior of the Homeless.

For one, Reinke, in trying to save strangers, neglects his family and imposes upon them his selflessness in helping others (by them staying in his home), so it becomes a sort of paradoxical selfishness. Moreover, in a twist that was jaw-dropping, it turns out Reinke was cheating on his wife with other men, hiding his real self.

By the end of the film, he’s now trying to find work in the oil fields. It’s extraordinary the flip from Savior of the Homeless to Homeless Needing a Savior. Fear had become such that the Overnighters program was shutdown and he had to resign as pastor (along with the adultery part).

Adding on to the fear of the outsider is the fear of the sex offender. Immediately such a label conjures up the worst caricatures imaginable. And yet, not everyone on the sex offender register is on there for molesting little boys and/or girls, but that’s the perception. Which is the cruelness of the register and its fatal flaw as some indicator of wrongdoing.

Reinke allowed a sex offender to stay in his home and then one of his trusted helpers in the church was a sex offender. The fear-mongering newspaper found out about it and all hell broke loose.

From that point on, along with the battles with the city and his church congregation just to maintain the program, you can see Reinke unraveling. He seems to get more disheveled and disjointed as the film progresses; he’s quicker to anger and be confrontational, too.

As Reinke says to a meth addicted man at one point, “We both have darkness within us.” And throughout the course of the film, one senses that Reinke is losing the reins on his darkness.

In that way, the Overnighters, especially with that bombshell ending, becomes oddly, a character study in Reinke more than proclamations on small town ethos or fear or how we treat one another.

The short end of that musing is something we all know, but hate knowing: The best of us still aren’t perfect and never can be. Martin Luther King was an adulterer. John Lennon hit women. And Reinke slept with other men while married (not that I’m equating all three men for their deeds, just using examples). It is what it is. As such, perhaps we have to compartmentalize this when we consider the calculus of what these men have offered to society.

There’s much to focus in on with this documentary. The particular lives of the men that came to North Dakota and the tribulations they face (in one cruel twist, one man gets in a serious car accident), the townspeople and their fears and then Reinke himself. In all though, it’s an extraordinarily human, contemporary look at American life, American fears, American characters and American ethics.

Dreams, hopes, nightmares, pain, love, hurt; it’s all there, bubbling beneath the surface like the oil that promises a better tomorrow. Instead, they have the messiness of today and the leftovers of yesterday. 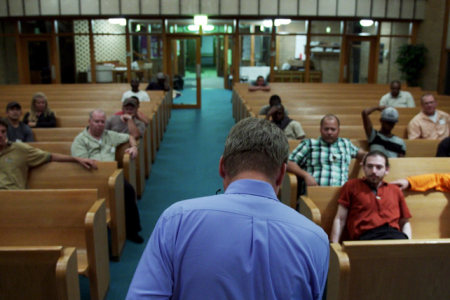 11 thoughts on ““The Overnighters” A Film Review”