Currently, 60 percent of American voters oppose accepting Syrian refugees (eight in 10 Republicans). The only time in American history going back to 1939 with children refugees from Germany, only the couple hundred refugees from Kosovo had better favorable ratings (66 percent favored vs. 30 percent opposed).

Only 34 percent of Americans (in a 2012 poll) correctly identified Obama as a Christian.

Then there’s the more fun crap such as: 18 percent of Americans think the sun revolves around the earth (this doesn’t just apply to Americans, by the way).

In other words, the point is: if you’re pointing to voter opinion polls to show the rightness of your position and the wrongness of another’s position, then you’ve already failed.

Voters have opinions about a lot of things. Voters can be wrong. They can also be right. But just because I can get 10 more people to agree with my view on something doesn’t make it right. More simply put, quantity doesn’t reflect accuracy. The argument still has to stand on its own merits whether one person believes it or 10 million.

If 99% of American voters were opposed to accepting Syrian refugees that doesn’t mean they are right in that lack of acceptance or that that is the course of action (or inaction as it were) we ought to take. 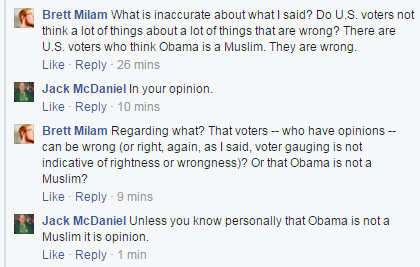 I guess I have to get to know Obama personally first. Remember folks, the individual here is not isolated. There are a great number of Americans, mostly Republicans, that don’t know what Obama’s religion is or think he’s a Muslim and of course, the insidious part of that latter belief is the underlining implication: if Obama was a Muslim, then it would be a bad thing because Muslims are bad. And so it doesn’t take much to wonder why Muslims continue to be treated as they are here and in other Western countries. Meanwhile, the ISIS propagandist gets a hard-on.