Time to revisit a nightmare … 1984’s A Nightmare on Elm Street. I don’t remember the first time I watched this or even how many times I’ve seen it, but I’ve always been a Halloween/Michael Myers guy. I’ve seen some of the Nightmare and Friday the 13th movies, but not nearly as often or as comprehensively.

Even this one, the original Nightmare, there were parts I didn’t remember seeing before. But thanks to the horror franchise podcast, Halloweenies, I’ve been obsessively binge listening to lately, I wanted to revisit the Nightmare series. As usual, I take some notes here and there as I watch the movie, so more or less my thoughts are in chronological order.

First off, as an overall premise, I think it’s absolutely genius, and it’s rather shocking that horror movies had been around for decades before someone, like the brilliant West Craven (who wrote and directed this), came around and said, “What if we did a horror movie centered on sleep?” That is, what if all the horror happened during your dreams? Everyone can relate to having to sleep. Everyone can relate to having dreams and nightmares. And everyone can understand the abject terror of trying to fight sleep, knowing you will succumb to it, and therefore, you’ll be at the mercy of a maniac like Freddy Krueger (played by the iconic Robert Englund). It’s absolutely brilliant. Even the backstory of how he was this child killer, parents of the town killed him in a fire, and now he’s back to enact revenge against the parents’ kids, is a great backstory. It’s enough to be like, “Whoa,” without it ruining the mystique.

Plus, I think it’s different than other horror movies at the time where parents play a central role. In other horror films, parents are at the peripheral at best.

So let’s get to the actual film itself.

The opening with Freddy Krueger making the iconic knives-glove, with the weird grunting and that prologue music. It doesn’t seem to have a distinctive name other than … prologue, but whew.

Then we go to the boiler room. What scene setting all of this is. And it caps it off with the famous “nursery rhyme” One, Two, Freddy’s Coming For You:

See, even before I ever saw this film, I had already heard that from my friends on the playground. I feel like they played around with the lyrics, though. I could have sworn my friend told it to me like, “Five, six, grab your Kendo sticks.” But, who knows.

One criticism I would have is that through the Wikipedia, I know that this takes place in the fictional town of Springwood, Ohio (Buckeye State!), and obviously given the title namesake, on Elm Street, but unless I missed it, is that mentioned at all? Are there any establishing shots that tell us this is Springwood, and particularly, Elm Street? I must’ve missed the beginning when Freddy is chasing his first victim, and they pass by a street sign or something.

In contrast, Haddonfield in Halloween and Camp Crystal Lake in Friday the 13th feel like characters in themselves in terms of how they are established in the respective films. I never really got the sense of Springwood or Elm Street.

Speaking of Halloween, though, one of the things this film does extraordinarily well much like that film is to keep Freddy in the shadows. We don’t get to see too much of Freddy, and at this point he’s also not speaking too much, so that makes him all the more scary.

“This is God,” Freddy Krueger says.

Another scene straight out of Halloween is when Nancy Thompson (played by Heather Lagenkamp, who does okay, but let’s just say, she’s no Jamie Lee Curtis) is in the classroom and basically tells us what the theme of the film is about. “What is seen is not always real,” the teacher says. That’s an echo of the teacher in Halloween who talks about fate.

What a horrifying film this is with some great practical effects. I think CGI gets a bad reputation, mostly because when it first came into popular usage in the 1990s and early 2000s, it killed practical effects and looks dated now (CGI nowadays is much better). But there really is something to be said for practical effects, particularly in the horror genre. For a movie made 36 years ago using practical effects, it holds up extremely well. Not all of it, of course, but the big scenes sure do.

One of the best is the very first kill of Tina Gray (played by Amanda Wyss), who gets dragged mercilessly up the wall and then the ceiling as her boyfriend, Rod Lane (played by Nick Corri), watches on in agony, unable to help. He then gets arrested for her murder.

But even the scenes that aren’t so much practical effects as they are horrifying, like Tina in the body bag, is a great way to establish the horror of Freddy Krueger.

On the practical effect front, though, we also get the iconic Freddy hand in the bathtub sequence, and what a shot it is. That much work in practical effects for only five seconds, if that, of screen time. It’s extraordinary, and makes all the difference. And was worth it, because 36 years later, it’s still talked about in horror circles. 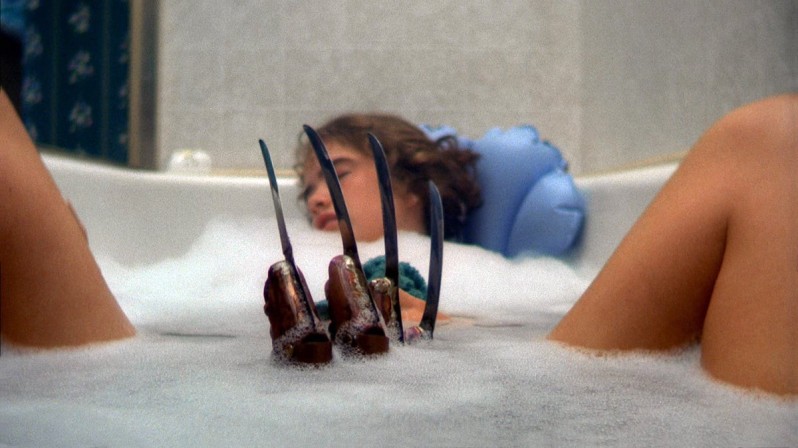 Another scene of special effects I love is when Nancy goes to run up the stairs and they turn to goo, I think it is. It looks great, and is another one of my phobias, both that I will become slow when running from someone dangerous and that the stairs will malfunction in some way.

Introducing Johnny Deep, who plays Glen Lantz, Nancy’s boyfriend, gets killed with a great (albeit ridiculous) special effects scene, too, with the gusher of blood. No human body would have that much blood, but it’s horrific, all the same.

Something else I thought about in relation to Halloween is that it’s more of that slow-burn, low death count variety. Not a lot of people die in this film, and sure, when they do it’s a lot more gruesome than in Halloween, but it’s not a total bloodletting affair. There’s real character development and attention to tension-building.

Finally, and I’ll stop after this, another homage to Halloween is that Nancy asks Lantz if he believes in The Boogeyman. Michael Myers is regularly referred to in that manner in the first film.

However, something that is much different than Halloween is that unlike Laurie Strode (played by Curtis), who finds herself having to confront The Boogeyman, Nancy actively takes the fight to Freddy. First, she gets his famous fedora to bring back to the real world, and then she takes it to him with Home Alone-style shenanigans to capture him in reality (even though Home Alone was still six years away, it’s still the Home Alone signature).

I like that; it’s different. The protagonist is taking it to the murderous villain.

What are we left to think at the end? Was the entire movie a dream? Was only the final moments a dream? Is Nancy alive or dead? What happened to Krueger? I like how open-ended it feels. One thing that seems certain: Krueger isn’t “dead.”

What do you make of the first Nightmare film?