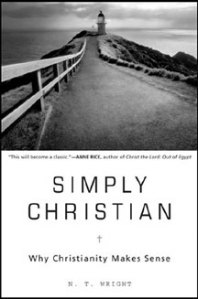 Okay. So back in August of ’09, I went out and bought the book Simply Christian by N.T. Wright. I read a little bit of it on that day and then when I returned home from work on a Sunday, I completed the book in one sitting. I honestly couldn’t put it down. The way in which N.T. Wright presents his case is certainly compelling and interesting. Not to mention for the most part he presents it in a clear and easily accessible way (there are sections where I feel he muddled a bit too much in the language of the scripture). I’m going to go through the book (not all of it because that would take too long) and highlight some points that I found thought provoking and worth contemplation. I’m also going to mention a few points that I didn’t agree with or that I may have questions about.

His observations at the beginning of the book on justice are quite poignant and mostly correct. Justice truly is something we can’t grasp even though we certainly imagine it in its fullest form (at least to the extent of our capacity to even do so).

(On a small note. He says this, “And now we have the new global evils: rampant, uncaring and irresponsible materialism and capitalism on the one hand…” Throughout the book he takes a few shots at capitalism, greed and so forth. First off, equating capitalism with some sort of global evil is absurd. Secondly, equating it with the idea of “uncaring and irresponsible” is also asinine. Granted, materialism exists in many fashions, but that is the choice of human beings. There is a bit of irony here. I’d imagine many religious people wouldn’t be in favor of free markets. But (and here is the irony), free markets almost need churches. Churches would be the leg holding a lot of society up in terms of charity and good will. But overall, that isn’t the focus of the book and I’m not going to derail the message of the book by going off on a political tangent.)

The whole point of Wright discussing justice is because of our sense of injustice. We don’t understand some of the so-called prevailing evils that exist in the world and at times, feel we can’t seem to progress to a mightier notion of justice despite our many advances as a civilization. Thus, the world in a sense needs “rescuing”. It needs to be put to “rights” (as Wright mentions often throughout the book). Therefore, he’s obviously suggesting God to be the “mover and shaker” of putting the world to rights.

Before he goes on to the next “echoes of a voice”, he talks mildly about the separation of church and state in the West. Not just in terms of the law, but in our attitudes to the religious. Modern secularism is a bit more profound than piousness he seems to be implying. I’m not sure about that. Just a casual glance at the political scene and our cultural would suggest that religion still has a very strong vice grip if you will, on the movements of American society.

Anyhow, his next echo is spirituality. Followed by relationships and beauty. Much like his observations on justice, he echoes the paradoxical complexity of relationships, spirituality and beauty. And he ties this all into the “knowing” and “truth” and therefore, “love” of God and so forth. More to that later.

The “three options” is one of my favorite parts of the book. The first option: Heaven and Earth are almost interchangeable in that God is everywhere and everything. This is called pantheism. This is what I always imagined Christians believed. And through this, as Wright mentions pantheists do, I had a hard time computing evil within these parameters. But now it makes sense, as we’ll see within option three.

Option two is deism: the idea that God or a group of gods are far away and detached from this world. But at times intervene (hence miracles and so-called “supernatural events”). Most of the Founding Fathers were deists.

Option three is the Christian belief that Heaven and Earth overlap and interlock in certain places. As Wright says, it embraces the complexity and paradox of life. So to use an analogy with this option that makes evil more understandable, the human race is much like the game Sims or Roller coaster Tycoon. In that, you create all the people and the way they live, but if you leave them to their own device they will burn the place down for whatever reason. So Jesus was sent to save the human race and open that door to God in a way.

Finally he begins to discuss Jesus and the prophecies surrounding his coming and then his death and resurrection.

It certainly is compelling, the idea of the resurrection. In that, the only way for Christianity as a movement to succeed was for Jesus to have actually resurrected. That doesn’t mean I believe it actually occurred, but I don’t outright believe it didn’t either. On a similar note, I also wouldn’t discount the validity at least in a historical context of the Gospels.

Essentially Jesus was the embodiment of God’s so-called rescue plan to save the earth. The door has been open to where the four echoing voices of justice, spirituality, relationship and beauty can be rectified so to speak. Going back to the resurrection, the point of it shows that God’s Kingdom has come and Jesus is that door between the two places (Heaven and Earth). Not just a “life after death and go to heaven” type of thing.

Christianity is essentially then living through Jesus to bring about this new world if you will. As I mentioned, the book presents a great theological case for Christianity, specifically Jesus and so forth. A lot of it makes a lot of sense theoretically.

(On another small note, with vague language Wright does seem to go off on a tangent to dismiss homosexuals and justifies it with the idea of procreation and the story of Genesis and so forth. I was just amazed at the contradiction here. For a guy that mentions Desmond Tutu quite frequently and seems to admire what this guy did in South Africa through non-violent means (an example he uses to highlight what a good Christian can do if he hears the message of The Lord properly), but dismisses apparently, Tutu’s views on homosexuals unfortunately. Oh well.)

This book has done a few things:

1.) Given me a better understanding of God’s plan for the world.

2.) A better understanding of Jesus and what he did and what it all means.

3.) A more encompassing view of what it means to be a Christian and theology in general.

That being said, going from my memory of reading the book (since I’m too lazy to go back and search through it):

1.) I wish he had addressed the main reason why Christianity is the “way to God” in comparison to Judaism and Islam and for that matter, any other religion. He mentions a few scattered points vaguely from time to time. But nothing to comprehensive or coherent that I can recall.

2.) As I mentioned, I have a better understanding of God’s plan. However, I still don’t grasp how Christians even through the Bible know what God’s plans are, why he has a plan and so forth. Its too much a leap in my human mental capacity (as it should for every other human) to map out apparently as the Bible does (from the set-up of Jesus’ need to come, to his death and resurrection, to the ultimate day when Jesus will reappear and the new world of creation will be here) what God will do. I’m still unable to make that connection there.

3.) It’s a very nice and comforting thought that sense injustice exists and the paradoxes of relationships, spirituality and beauty also exist, that to bring it all together and make sense whereby eventually the “lamb will lie with the wolf” and the puppeteer of such an event will be God through the actions of Jesus in bringing Heaven and Earth together via his Sacrifice. But in the same vein as the above problem I have, this doesn’t actually mean it will happen and can happen. This is actually one of the reasons I’m against the death penalty. I don’t feel we as humans can fully administer justice to another human being for the crime of murder. So in a way, I am hoping that a higher justice does in fact exist. Respect to Wright is deserved because he does tie all this together well so that it is clear what God is going to do, what Jesus did and what a Christian needs to do. Even if I can’t fully make the connection of the “why”.

4.) On a small note, it would have been nice for him to mention the mega church because that is something that really irritates me. Obviously I understand Wright can’t discuss every facet of theology and organized religion though.

On a final note, I do like how he validated the purpose of the church in the face of scorn and criticism and mentions what they should do and be about.

Of course, I’m not converted to Christianity or whatever. That can’t happen with one book. It may not happen at all. I keep saying this and I’ll say it again though: Wright’s case is compelling and worth further contemplation.