Pfc. Bradley #Manning has been acquitted of aiding the enemy for giving secrets to WikiLeaks. Full story: http://t.co/Z3TAMJ8gzu

This was by far the most serious charge against Bradley Manning. Some more reactions…

Remember, you can torture with impunity, but if you tell the public about torture and other criminal acts by government, you go to jail.

CORRECTION: Had Manning been convicted of “aiding the enemy” would have set dangerous precedent for future dissemination of information.

All in all at least, it’s good to know that he won’t be charged with the absolutely asinine crime of aiding the enemy, but the fact that he’s still being charged with espionage and faces as much potential jail time as he does, it alarming and offensive to democracy and liberty, as far as I see it. The Obama administration’s aggressive prosecution of whistleblowers takes a step back in some small measure with the acquittal of the “aiding the enemy” charge. It’s something. 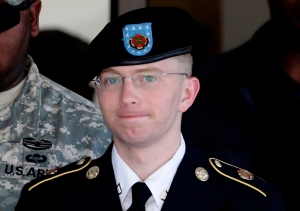