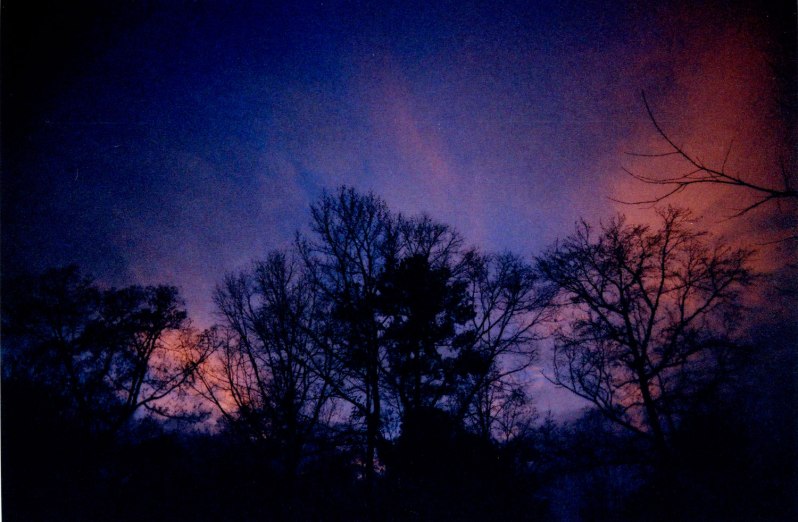 Today was trash day. Which meant it was a good day for Peter Boudreaux.

When the sun set and the cans lined the curbs of suburbia, Peter came around in his 1995 Toyota Tacoma. The baby blue that had once coated the compact truck with a warm sheen had rusted over long ago.

Peter had one hand on the steering wheel and another twitching away on a Camel Blue; his last one. And one he had found left smoldering on the edge of an ashtray outside a Sonic. There was a slight hint of cherry as he took a drag. Maybe it had been left by a buxom redheaded beauty with cherry lip gloss. Like Clarice.

Clothes and blankets were tossed aside on the passenger floor to make room. Mostly just Peter’s one jacket, one sweater and pair of jeans, other than the Levi’s he wore now. Those were his blankets and last line of defense against bone-rattling cold.

A large water bottle filled with a local park’s fountain water sat in his cup holder half-empty. Next to it, in the other cup holder was a bottle of sanitizer. Just in case. He kept a picture of Clarice stuck to the rear-view mirror when she first started getting bits of white hair among her gorgeous, long strands of red. She shielded the camera with one hand and flipped it off with the other. It captured her essence more than he realized at the time.

Devil’s Pocket was Peter’s stomping grounds. He never ventured much beyond the tiny neighborhood’s boundaries because their trash wasn’t just his treasure to survive the next day, but his last frail link to human companionship. He knew these people. He liked to think of them as his family – his only family since Clarice.

In his time, among the trash, he had found both negative and positive pregnancy tests, college admission rejection letters, unwanted toys and bikes and skates, eye glasses, mothballed clothes, too-chewed-away dog bowls, cell phones (no service, obviously, but he had about ten of them stashed away in his glove box) and old DVDs, although he couldn’t watch them; he enjoyed the aesthetic of the old timey art on the cases.

Once, Peter had found a large box with a baby’s crib pictured on the front, empty. He found himself elated, starring longingly in through the ornate window of the house, wondering whether it was a boy or girl, if they had decided on a name yet and what colors they were using for the baby’s room. He’d go with a gender neutral color like orange or green, if they wanted to be a bit more daring.

The next week, the wooden white crib filled the trash can to the rim in pieces. Peter cried long and hard that night and abandoned his one-smoke-a-night rule. He took one of the legs of the crib from the can. He didn’t know why, but it comforted him.

Books also featured prominently among the suburbia landfills. Last week he had found a good-condition copy of The Count of Monte Cristo, which he devoured the day after trash day. Because every day that’s not trash day is just waiting for trash day. Or pawning what he had accumulated for more gas, more time. Most of the pawn money came from discarded car tires, furniture (chairs, tables, doors) and cans and wine corks from the few people that recycled.

Then there was the house with the station wagon. They had given Peter a new mattress three weeks ago. His other one had grease stains on it and had the smell of a dog’s drooled over tennis ball, so he switched. This one seemed like it was meant for a pre-teen, but it was comfortable enough, if Peter curled his long legs into a ball. The husband or the wife or a subversive teenager also liked to hide Corona bottles underneath bags of trash.

There was also the house with the basketball hoop. They had given Peter a new pair of Nike’s. Granted, the left shoe had a flap in the front that exposed his socked toes, but the arch support was much kinder to his soles. One can concealed a bundle of bloody towels at the bottom. Not every week on trash day, but enough to make Peter wonder how whoever could afford so many towels and how whoever could afford to expel so much blood.

And then there was Gregory’s house; he knew his name because it was stenciled on the license plate of his BMW, which always seemed to sit in the driveway, unused, unblemished. Gregory had discarded a framed photo of 1960s Batman; the goofy, cheesy one played by Adam West; he stood there, hands on his hips, chest pumped out, trying to look intimidating. He took it out of the frame and used an old roll of tape to affix it to the back of the cab. It flapped now in the wind. Gregory seemed to still be hanging on to the 1960s with a copy of Playboy every month. Not that Peter judged. The girls on the cover were hot, if a bit too polished for his tastes and probably hotter on the inside pages. Ideally, he’d take it fresh from the stand and rub one out, but here, from Gregory, potentially sticky pages kept his hands at bay. And his urges died a long time ago, anyway.

Today was trash day for Peter Boudreaux, but something was different. No, the cans still lined the curbs. Gregory’s BMW with his name on the license plate still sat in the driveway looking sexy. The sun still set with an array of purple, red and yellow hues that framed the night sky better than Picasso ever could. But something was amiss.

Then he noticed it sitting in front of the house of the unneeded crib: a “For Sale,” sign. Peter saw the plastic red hexagon on a white wooden stick as an overgrown, unwanted weed in the yard. It didn’t fit. Not in their yard. Not at Devil’s Pocket. People stayed in Devil’s Pocket for life. Young upstarts looking to plant roots, not “For Sale” signs. It wasn’t like nearby Point Breeze, littered with them along with bordered up houses, even some with police tape across the front doors.

Peter drummed his fingers on the dashboard and then tossed the cherry-laced cigarette out the window. It wasn’t supposed to be like this. Any of this; none of it made sense. Suburban dumpster diving, pawning the misfit items of the middle class, still sitting in this truck, alone, without Clarice.

She was tired and old and that was it. It was as if she and death had an amicable understanding. Death must have seemed like a restful retreat compared to her early life under the Stasi in East Berlin or molding a starry-eyed, whimsical French college student into a man; a man that would later help her fly to America to set roots. Roots that now seemed like an untenable idealistic fantasy.

A few days before she passed, she sat upright for the first time in months. She had a glow about her that said she was drinking heartedly from the well of life one last time, getting one last thirst-quenching squeeze out of it. That was Clarice – grabbing life by the fucking balls and commanding, “Follow me this way.” She was nibbling on an old favorite, a piece of Filinchen, popular in East Germany, similar to crisp bread with her personal delight: a touch of honey spread evenly across the top.

She looked over at Peter; he leaned against the refrigerator, arms folded across his chest, starring at her, threatening tears, and she slammed her Filinchen down on the plate, which broke it in two and stood to her feet. This was the first time unassisted she had stood on her own two feet in a year. Peter rushed to her, but she held up her hand.

“Stop,” she said. And Peter stopped. “Sit down.” Peter sat down. Not one to ignore the fire behind her eyes, even at 75, Peter listened.

“My time is coming, Peter, I know it is and–,” Peter tried to stand and protest, but she shot him a fiery look. He returned to his seat, defeated.

“Leben, Peter, nur leben.” She collapsed back into her chair, breathing heavy, exhausted, and returned to her Filinchen. When she had flare of passion, Clarice fell back to her Germanic roots.

Before Peter realized what he was doing, he was out of his once-baby blue Toyota Tacoma, and he shuffled over to the “For Sale” sign. He clasped his hands toward the middle of the wood stake and heaved. Nothing happened except a splinter across his wrinkled palm. He ignored it and heaved again and the stake slid out a few inches from the ground. Damn real estate agent hammered it in good. And he was old. Peter pulled again and this time it slid out bringing with it a mound of dirt and grass. With the sign under his arm, his moved to the front door of the house of the unneeded crib. And he knocked.

The homeowners were at the table for dinner when they heard Peter’s rapacious knocking.

“I’ll get it,” the man said, and scooted his chair out from the table. She wasn’t eating, anyway. She hadn’t eaten in two days. She did that.

He unlocked the dead bolt and pulled the door open. He saw a man, likely in his seventies, with gray hair on the sides of his head, a long face, hunched back and the clearest blue eyes he’d ever seen, in mid-knock and chest heaving up and down and the “For Sale” sign under his arm.

“Can I…are you okay, sir?” the man muttered.

Peter couldn’t find his voice; it was as if his vocal chords were dusted from lack of use.

“Where are you guys going? You can’t go. You just can’t,” Peter said. His old finger pointed at the man, accusatory.

“Sir, I’m sorry, what-who are you and what are you doing with our sign?” the man said, with an instinctive step backward.

“What’s going on?” the woman called from the kitchen. “Nothing, honey, an older gentleman is here. We’re talking,” he replied.

“Devil’s Pocket is special. Why would you want to leave? Is it Gregory?” Peter said.

In mid-sentence, Peter turned and heaved the “For Sale” sign toward the front yard. It was a pathetic throw, as the sign only made it half-way down the porch steps. Peter turned back to the man.

“Was it the baby? Is that why?” Peter said. Peter’s finger now prodded the man’s chest.

That was enough. “I have to ask you to leave, now,” the man said, as he started to shut the door on Peter.

Peter had tears in his eyes and  his fists clenched at his sides and he didn’t know why. He didn’t know what he was doing. He was tired and thought again of Clarice.

Before the man could say anything, Peter walked away, shoulders hunched down lower than usual. The man watched him for a moment longer, shook his head, ignored the “For Sale” sign on his steps and closed the door behind him.

Peter walked back to his truck, climbed in and nestled behind the wheel. He looked at Clarice’s picture. Even as she started getting white hair dotting her once vibrant red hair, Peter found her as alluring as ever. He caressed the photo with the slightest touch of his wrinkled, tired finger.

“I can’t anymore,” he muttered to Clarice, and closed his eyes.