I’ve been meaning to make this post for about a week now since the 13th anniversary of 9/11 and just haven’t gotten around to it me being me. But, check this out: 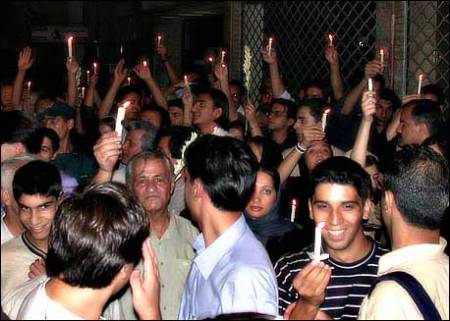 As the one picture spoils, these are from Iran after 9/11. Some 10,000 Iranians spontaneously held vigils for the victims of 9/11.  Some 60,000 observed a moment of silence in Tehran’s football stadium.

I get fucking chills looking at these pictures and even a bit choked up because it makes me terribly, terribly sad how demonized the Iranians are. While their government may have some issues, the people largely, are good. They are not evil. They are just like us. And yet, we said, “Fuck you guys,” after 9/11.

Actually, you know what the Iranian government did after 9/11? They tried to repair severed bonds from the last three-some decades (that we fueled, by the way, by overthrowing their elected president in 1953 and then accidentally shooting down one of their civilian airliners in 1988, which we still haven’t apologized for) by offering to help us in our fight against Al-Qaeda.

James F. Dobbins, the Bush administration’s chief negotiator on Afghanistan in late 2001, said Iran was “comprehensively helpful” in the aftermath of the 9-11 attack in 2001 in working to overthrow the Taliban militias’ rule and collaborating with the United States to install the Karzai government in Kabul.

Iranian diplomats made clear at the time they were looking for broader cooperation with the United States, but the Bush administration was not interested, the author of “After the Taliban: Nation-Building in Afghanistan,” said in a separate interview.

We had a common enemy in the Taliban in Afghanistan. Iran had almost gone to war with them three years prior. Again, squandered opportunity.

What could have been? Instead of that bellicosity, we could have forged some very necessary ties with the Muslim community. Instead, we invaded two Muslim countries, bombed a few others and generally, sowed the seeds for greater American hatred at a time when most of the world was ready to line up right behind us. It’s frustrating to think of what could have been.