With an election coming, Republicans and Democrats have no interest in putting their name next to a vote on whether we ought to be bombing Syria or not. That war is distilled down to this political calculation hardly matters, as many incumbents will be re-elected. And it’s a moot point, anyway, when the president claims to have the authority to bomb them under a piece of legislation a year prior he voiced his opposition to.

While I do vote (for some reason), I absolutely agree about the futility of voting. What would my vote change in the face of that? Even if Congress didn’t acquiesce their power to the president and even if the president didn’t act on his own accord, both parties are in lockstep over bombing ISIS in Iraq and Syria. The only difference is degree, not kind, as it is with any other issue.

Meanwhile, Republicans that decry federal spending have no problem with a $1 billion and increasing price tag for this newest war. Meanwhile, Democrats that decry corporations have no problem with them being the biggest benefactors of our newest war. Meanwhile, the Nobel Peace Prize-winning president claims Syria and Iraq aren’t regulated by our “strictest of standards” for avoiding civilians with our bombings, what they call the “near certainty” policy that no civilians will be killed. Yeah, screw those dead women and children. War!

I’m interested to see a Republican re-take the White House in ’16 merely to see the re-emergence of the anti-war crowd. It’ll be amusing and by that, I mean sad. “My guy” politics is an almost worse strain on our political system than apathy, like when we push war, the most important action a state takes, to our peripheral. 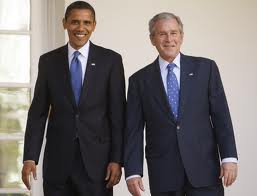