If only, right? Ellie Cornell does such a tremendous job with the Rachel Carruthers character that, if the studio heads, directors, and writers wanted to, you actually had the replacement for Jamie Lee Curtis, who played Laurie Strode in the 1978 and 1981 films.

To be clear, there’s no replacing the Laurie Strode character and Jamie Lee Curtis’ portrayal. That’s an iconic character in an iconic film, opposite the most iconic portrayal of Michael Myers, so that’s not going to be replaced.

But my goodness. Ellie Cornell really stepped into that role as the “new Laurie” with Halloween 4: The Return of Michael Myers released in 1988. I re-watched it on Amazon Prime tonight for the first time in at least six years, I reckon.

After the absolute bomb commercially and critically of 1982’s Halloween III: Season of the Witch because it didn’t have Michael Myers in it, they brought Michael Myers back in 1988. Donald Pleasence returns as Dr. Sam Loomis, and we also get a new, well-done character and portrayal with Beau Starr as Sheriff Ben Meeker. Tom Morga steps in to play Michael Myers. Morga is serviceable.

And of course, I’d be remiss if I didn’t mention Danielle Harris as Jamie Lloyd, the niece of Michael Myers, and with Laurie ostensibly dead in the film, the new objection of Myers’ obsession. Child actors are typically either really great or really bad. Harris is in the “really great” category.

So, in 1988, 10 years after the first film, the studio has lucked out by getting someone that could replace the Laurie character and Jamie Lee Curtis, and on top of that, they have a brilliant child actress in Danielle Harris as Jamie, and her and Carruthers have fantastic chemistry. It’s really sweet to watch. It works. AND, on top of that, they have another great portrayal of the Haddonfield Sheriff position in Beau Starr as Sheriff Ben Meeker after Charles Cyphers’ great portrayal of Sheriff Leigh Brackett in the original.

Aside from the sweet moments with Jamie, Rachel offers some great action and inventiveness to get away from Michael Myers and protect Jamie. First, the simple act of tossing a bunch of stuff in Myers’ way as he’s trying to come up the stairs to get them. Then using a rope (I think) to climb down the roof of the house in a scene where Carruthers actually got hurt because they missed one of the screws in the roof, and it cut her stomach open. Then after that, when Michael Myers catches up to the rural guys in the truck, kills them, leaving her to drive the truck, she’s able to run Michael Myers over. But not before delivering a believable line cool line, “Die. You. Son of. A bitch!”

Rachel’s character arc from bratty teen at the beginning who balks at having to babysit Jamie to jealous/angry girlfriend over Brady (played by Sasha Jenson) for cheating on her to genuinely worried and scared for Jamie to slowly beginning to take charge toward the end, and then full blown bad-ass with the aforementioned line, it’s great to see. And I was fully bought in to, okay, this is the new Laurie. She’s great. Well done, Ellie Cornell.

But by Halloween 5, it all gets wasted. Such a shame. I’ll save more of that rant when I review that film, but gah. Seriously, it’s frustrating. I’ve always liked this movie as a kid/teenager and young adult, but with new eyes with this rewatch, I have such respect and appreciation for Cornell.

Anyhow, there’s a lot to like about Halloween 4. The entire first half feels as close to the mood as the original as any sequel has gotten besides perhaps Halloween II. It’s genuinely scary with the opening scenes at the hospital when they are transferring what they believe to be Michael Myers’ catatonic body to when we think he’s already stalking Jamie. Those are great mood-setting scenes.

Compare the mask from this one: 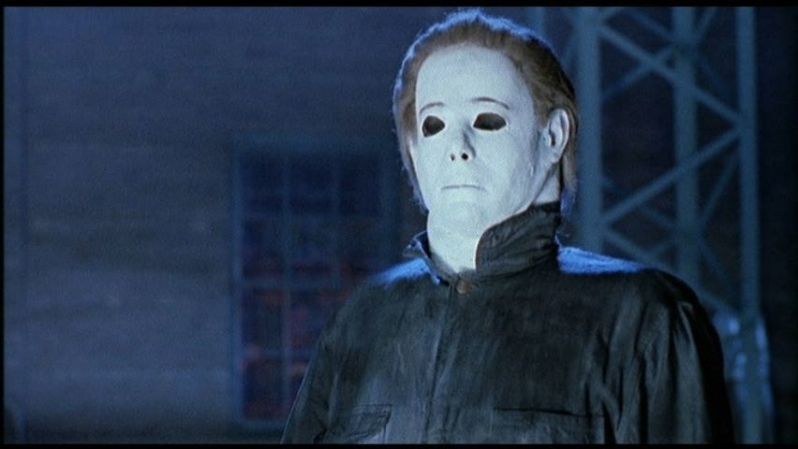 Notice the difference? The 1978 version has more defined features, whereas this one almost looks like a pasty white face that better resembles the Michelin Man from Michelin tyre company than The Shape.

But back to the positives. The music is on point. Haddonfield feels authentically Halloween again. The 90-minute runtime is perfect; this isn’t a film overstaying its welcome. Sure, it’s a bit more violent than the original, with the thumb through the forehead at the beginning, a shotgun through the stomach toward the middle, and a ripped off face at the end, but it didn’t feel as over-the-top as later films would get. I don’t even think it’s as gruesome as some of the Halloween II scenes.

One other genuinely haunting scene is when one of the sheriff’s deputies is rocking in the chair with the shotgun in earlier scenes, and then when Kelly Meeker (played by Kathleen Kinmont) approaches with coffee, she lights the candle to reveal the deputy is dead, and this time, we see that it was Michael Myers sitting in the rocking chair with the shotgun, and he stands up. The lighting and shadow work and the reveal is all fantastic.

Another one of my favorite scenes in the film is that Brady, despite being a cheating scumbag, actually redeems himself by essentially sacrificing himself to save Rachel and Jamie, and it gives us one of my favorite scenes in the franchise’s history. I’m a total sucker for the martyrdom aspect, and someone going face-to-face with Michael Myers. It’s suicidal, but bad-ass. And to my knowledge, it’s the first time someone has squared off with Michael Myers like that. Usually Myers catches people by surprise and kills them, but this time, Myers faced Brady head on.

Brady valiantly tried a few punches to Myers’ face to no avail, and then Myers grabs him by the head and lifts him off of his feet. In one last defiant move, Brady spits blood at Myers. I’m such a sucker for that last gasp of defiance. Also, with the huge window and the moonlight coming through, it’s well shot and lit. I appreciate that scene. It’s one of my favorites.

I know a lot of people hate the second half of the film when we get the over-the-top rural men from Haddonfield forming a mob to go after him, but I love that aspect. I love that 10 years later, when the town realizes Myers is back, they form a vigilante mob to go after him. It’s easy to believe that a rural town (or any town, really) would be like, “We’re sick of this Myers crap, we’ll deal with this ourselves.” Particularly, you have to consider, when the entire police department besides the sheriff and an old psychiatrist with a gun have been wiped out by Myers. That’s a neat idea, and it’s played to great effect when the mob inevitably kills the wrong man.

I’ve also heard people hate on the ending when Myers catches up to the men on the truck by hiding under the truck the entire time, and then popping up to kill them one-by-one. Some have likened it to feeling too Terminator-like. And with Terminator having been released four years earlier, I could see that influence perhaps. But I still enjoy it. It also leads to the line I love from Rachel, so I don’t mind.

Finally, I think it was extremely bold to more or less have Myers pass on his evilness to Jamie at the end, and then Jamie, like in the original, kills a family member (the mom who adopted her) in the same way: With a clown costume on, and we get the point-of-view from the killer. I’m not sure where that would have taken the franchise, but it was a bold and fun ending.

Overall, I think Halloween 4 is a good addition to the franchise, and it did a commendable job of trying to present the same sort of haunting mood and atmosphere as the original. It wasn’t too over-the-top or silly yet. And best of all, we got two new, great leads (and a secondary lead in the sheriff) out of it in Rachel and Jamie.

If, for some reason, you haven’t seen this sequel, but you enjoy the first two Halloween films (or just the first one), then I think this is worth your time. Check it out.