Okay, obviously, it wasn’t the death of the franchise since we got three more films, two remakes, and a retconned sequel in 2018, but the moment the Man in Black character walked off the bus in this film — actually, probably before that when Michael Myers’ wrist is shown at the beginning of the film with the mark of Thorn on it — the franchise took a precipitous nosedive.

There’s a lot to hate about this movie, so let’s just get that over with. Remember when I said in my review of the fourth film that Ellie Cornell as Rachel Carruthers was brilliant and could be a suitable replacement for the Jamie Lee Curtis/Laurie Strode role and performance?

Yeah. Well, this film killed Rachel Carruthers off in the first 21 minutes, and really, we get even less time with Rachel because she doesn’t show up until 11 minutes in. Originally, Ellie said she was going to be killed with a knife or scissors down her throat. Fortunately, she renegotiated that to a “regular” stabbing on the chest, but that doesn’t eliminate how bad this death was. And the way it was handled where she essentially disappears the rest of the film until the end when Michael Myers uses her body as a scare prop for Jamie Lloyd (played by Danielle Harris). That is, apparently her friends assume she went on a trip with her parents and her parents, I guess, thought she was with her friends and ditched them?

It just sucks that they wasted all of that potential. I get it, this film was rushed a year after Halloween 4 to release in October of 1989 to try to capitalize on the box office, but that was a mistake for a number of reasons. First, you gotta give fans time to want Myers again, at least three years like the original’s sequel between 1978 and 1981. Secondly, less than a year from one release to another means you’re necessarily getting a rushed script, rushed direction, and therefore, haphazard decisions for the overall franchise, such as the mark of Thorn storyline and the Man in Black.

Also, there’s some goofy scenes in this film that are hard to shake. At the beginning, we see Myers falling down a hillside into a river to escape the explosion the police set off to ensure he’s dead, and then he floats down a river. I don’t know, man, seeing Myers float down a river felt weird. It takes away his The Shape essence and mysteriousness.

Then Myers ends up at this local hermit’s shack, falls into a coma, and apparently the hermit nurses him back to health over the next year? Which, Myers thanks him by killing him. That’s fine, but it seems like there was the germ of an idea here that didn’t get fleshed out.

Am I the only one who took the ending of the fourth installment to mean Jamie’s stepmom was dead from the stabbing incident? Because it was mirroring what Myers did in the original film as a six-year-old to Judith Myers? But it seems like from the fifth one the stepmom is still alive. That blunts the potency of the parallel.

Another goofy scene that I didn’t notice any other time I’ve watched this on TV as a kid or teenager is when Jamie gets freaked out by Myers stalking Rachel at the house, so the police come over and check the house. Two bozo cops show up and they’re acting like two doofuses. But that’s not bad enough, there’s literally Benny Hill-type clown music.

Like, what are we doing here? This is a horror movie. There can be levity in a horror film, but this choice made no sense, and immediately took me out of (as I’ll explain later) a great scene.

Also also, it’s only been 12 months since Myers butchered an entire police station. Why are the cops acting like doofuses in the first place? Even if they think he’s dead this time (which would be the second time they erroneously believed that in the last 11 years), you would think they would still take it very seriously, right?

This isn’t so much goofy as just out-of-place, but the Dr. Sam Loomis character (played by Donald Pleasence) is deranged in this film, threatening Jamie, and using her as bait. I understand he was trying to get Myers to come to that spot with the chain net at the Myers house, but he also had the chance at almost point-blank range to shoot Myers and … didn’t? Instead, he got stabbed and left Jamie to fend for herself and got another cop, Deputy Charlie Block (played by Troy Evans), killed. I will note, Charlie actually seemed like a good cop as compared to the previous doofuses. He shoots Myers numerous times and tries to help Jamie get out, but Myers is just too powerful.

The Spitz character (as played by Matthew Walker) might be the most annoying character in horror movie history. I’m sure there is one more annoying, but he basically exists to prank, cackle, and then get impaled by a farm fork thing. Some think Mike or Mikey, Tina’s boyfriend (she’s played by Wendy Kaplan) is awful, too, but at least he’s only there momentarily, and only exists to get his car stolen. I did think it was kinda funny when Myers trolled Mikey by using his farm fork thing to scrape up his car.

I also thought the scene of Myers with Mike’s car chasing down Jamie and Billy (played by Jeffrey Landman) was a bit … goofy. Myers is a stalker on two feet, not a menace behind the wheel. It was a well-shot scene in a scary-looking location, and it was genuinely creepy to see two little kids running from a roaring vehicle with a psycho behind the wheel, but I don’t think it fits the Myers character.

On that note, a lot of people take issue with Tina. I actually don’t think Tina is that bad here. But she’s a far cry from the Rachel character, and before we can even really evaluate her much, she’s also dead. So now we’ve lost Rachel and Rachel’s replacement. On top of all of that, Jamie is mute most of the film. I don’t mind the character choice to have Jamie be mute, as long as you have Rachel with her throughout the movie because even mute, those two would have chemistry that can carry the movie along. But once you kill Rachel, then the mute thing is just another bad decision on top of bad decisions.

I actually like Myers’ mask in this film better than in the previous installment. The problem with this, though, is that Don Shanks, playing Myers, and maybe this wasn’t his fault, didn’t have the mask tucked into the mechanic uniform, and it’s noticeable and bugs me. Tuck it in, Mikey! 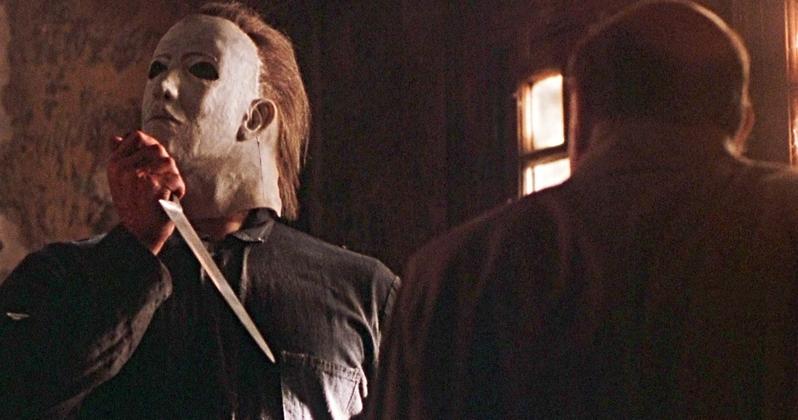 And finally, as I said, the mark of Thorn and Man in Black storyline is awful. I hate the idea that someone breaks Myers out of jail. After all, in the previous film, Myers single-handedly butchered the entire Haddonfield Police Department. Now in this film, one man, who isn’t Myers, also butchers an entire police department. So aside from repeating the same sort of concept, we have someone else doing it, which takes away from the mystique of Myers.

Oh, and remember how I said Beau Starr’s new Sheriff (Ben Meeker) was another great addition to the franchise? Yeah, he’s hardly in this film, and contrary to the tagline on the above poster, wasn’t ready for Myers, or at least, the Man in Black. Also, he apparently dies off screen? Another waste.

Now that I have all of that out of the way, let’s talk about some of the good stuff. Forget that Rachel ends up getting killed as a result of this scene: The opening sequence with Myers stalking Rachel in the house is well-done. It’s genuinely scary, and the best part about it is that it’s done in daylight. Horror movies rarely do kills or stalking or scares in the daylight, and this was done quite well. Give us more horror during the daylight, horror genre!

Also, I think this is the first time we get the Myers house as a setting since the first film, and I quite like that. The house, for obvious reasons, is dilapidated, and it looks great. That also gives us probably my favorite Dr. Loomis part in this film, which there aren’t many of sadly, and that’s when he gives the, “Go home!” monologue to Myers to try to goad him into going back to the Myers house.

When Tina gets in the car with who she thinks is Mikey and it’s actually Myers in some sort of weird mask is another genuinely freaky scene. She even kisses him on the mask! The mask is terrifying on the face of Myers, to be honest. 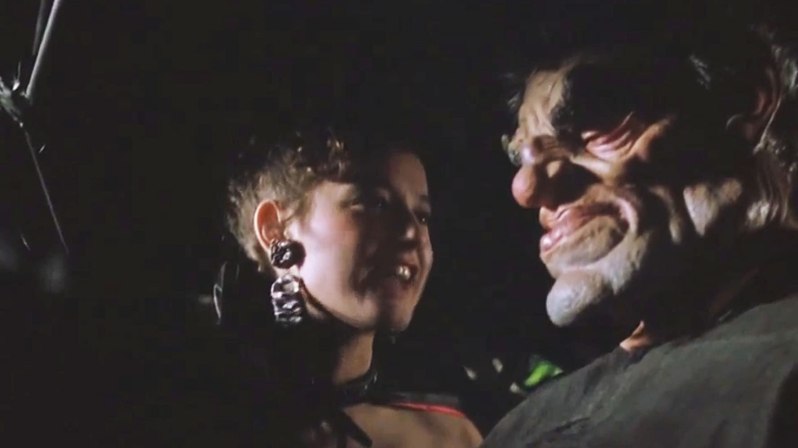 I know some people also hate the Billy character and criticize why Jamie would want to participate in a Halloween party only a year after the events of the last film. I don’t mind Billy or that aspect. I like Jamie having a little kid friend who understands her. I also think it makes sense that Jamie would want to try to do something normal after a year of abnormal issues.

There’s also criticism of the maskless scene at the end with Myers, where he approaches Jamie in the casket, and she convinces him to take the mask off. Then the camera zooms in and you see a single tear roll down Myers’ face. I’m not a big fan of Myers crying, but if you interpret it as the last remaining bit of humanity left in him, that’s fine. The maskless part is also fine since we saw him maskless in the first one. That’s hardly a paramount issue with this film.

Finally, the last bit I like from this film is when Dr. Loomis gets the best of Myers (lol) at the end, and then collapses over him, and you get that shot of an exhausted, crazed Loomis nearly face-to-face with an unconscious Myers. It’s a neat shot. But it’s also weird because they don’t show Dr. Loomis after that: Is he dead or alive? I’ve heard people say that was a way of killing off Dr. Loomis’ character and we’re to think he had a heart attack there. But then he comes back in Halloween 6, so I don’t know. I think that would have been a beautiful, fitting end to Dr. Loomis, though.

Overall, it’s a Michael Myers movie, and I like watching Michael Myers movies. There’s also some good things to like about this film, but there’s a lot to not like about it, and if we’re being honest, the negative outweighs the positive, particularly given what it leads to with Halloween 6 (the mark of Thorn nonsense).

I also mentioned that the previous installment was a sharp 90 minutes of horror. This one is only eight or so minutes longer and yet feels like 25 minutes longer.

All of that said, if you’re into this franchise, then it’s worth seeing the fifth one, but don’t expect something great.