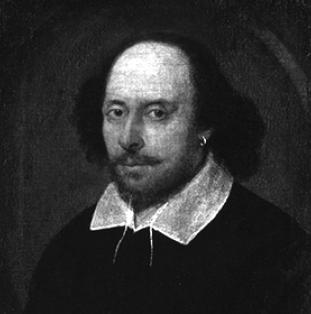 So, I came across this poem earlier this morning from a rather obscure poet. I’m not sure if anyone has heard of him. He was a poet and dramatist in the late 1500s. His name is William Shakespeare. Yep, The Bard himself makes his debut on my blog. What an honor for him, huh?!

Inevitability and the decay of time being countered with the power of words is a concept I’m fond of … as a writer.

Consider his Sonnet 15 When I consider every thing that grows:

When I consider every thing that grows
Holds in perfection but a little moment.
That this huge stage presenteth nought but shows
Whereon the stars in secret influence comment.
When I perceive that men as plants increase,
Cheerèd and checked even by the self-same sky,
Vaunt in their youthful sap, at height decrease,
And wear their brave state out of memory;
Then the conceit of this inconstant stay,
Sets you most rich in youth before my sight,
Where wasteful Time debateth with decay
To change your day of youth to sullied night;
And all in war with Time for love of you,
As he takes from you, I engraft you new.

This sonnet certainly seems attuned to that concept of inevitability and decay, no? Consider, he says, “When I perceive that men as plants increase, cheered and checked even by the same sky, vaunt in their youthful sap, at height decrease.” There’s also a sense of how fleeting it is. That the beauty of plants (and of humans) only exists in a moment of time, and eventually, that youth withers away.

The analogy of humans to plants and how, over time, we decay is a potent image. In this poem, Shakespeare seems to be setting time opposite love in a war of attrition. Which one is going to win out? Well, time is undefeated in the literal sense, but love can exist on a different plane entirely and outlast the decaying effects of time.

There’s also a sense that all of this is … for naught? That we waste so much of that undefeated, precious time by putting on a face, a face that also will wither away, but will be sustained by a falsehood), as he says, “And wear their brave state out of memory.”

Life as a stage is one of the most famous concepts from Shakespeare, and if life is a stage, then us operating on it means we often are putting on a performance instead of living our real lives. And it all seems rather silly, for lack of a better word.

Aside from being able to withstand the decay manifest by time with the all mighty pen and these love poems, there’s also another way: Procreation. In a way, we can defy time through procreation and continue our lineage. After all, as I quoted before, he says, “When I perceive that men as plants increase.” The cycle will start again, but at least there’s an “again” to start … again.

I’m not quite sure what to make of the last sentence, “As he takes from you, I engraft you new.” Is Shakespeare saying, through love, he “engrafts you new,” aka, through writing the poem, that breathes new life into the decaying person? Of course, that also seems … fake? Like the stage. In terms of, it’s a mask (grafting) on top of existing decay. The decay is still there, only hidden.

What do you make of this poem? I will admit, compared to some of his plays, the sonnets are far more accessible and plain spoken to the extent that someone writing in the late 1500s can be “simple.”