I’m back with another cereal review and perhaps my most audacious one yet: Kellogg’s Peeps Cereal. This “limited edition” cereal doesn’t seem so limited given that I would think it’s something advertised around Easter and Easter was in April. But, hey, I’m not complaining, I’ll eat some Peeps in August, and yes, Peeps cereal. Come on, you can’t pass this up, or at least, I can’t.

The name of the game for cereal is S-U-G-A-R. Yes, there other variations of cereal that are more than suitable and among my favorites, but ultimately, one of the best aspects of cereal is the sugar content.

Of course, the thing about Peeps, a rather divisive confectionery gelatinous marshmallow shaped like chicks, bunnies and other animals, is that they are overwhelmingly sugary. There’s no sort of ingredient that helps offset how sugary it is (apparently, they are made with a pinch of salt, but come on, you’re not noticing that pinch).

And that’s not too different here with Kellogg’s Peeps Cereal: It’s pure marshmallow sugariness, almost too much, just like eating a Peeps. I don’t mind Peeps. I’m one of those people that will eat those gooey goodnesses (that’s not a word, but go with me here), but I can’t eat too many of them precisely because they’re too sugary.

When it comes to these cereal reviews, I do two things first: Smell the cereal and try them dry. Opening the box, there’s an overwhelmingly Peeps smell. If you somehow didn’t know you had Peeps Cereal, you sure know when you open the box. As for the dry taste test, Kellogg’s, like any cereal really, suggests they make for good dry snacks (or even as an ice cream topping, which … heck yeah), but eh, as I’ll mentioned below, there aren’t enough marshmallows! That’s what we all want.

As I mentioned, a downside of these, aside from too potently sugary, is that there aren’t enough of the cute little chicks! Check out this bowl: 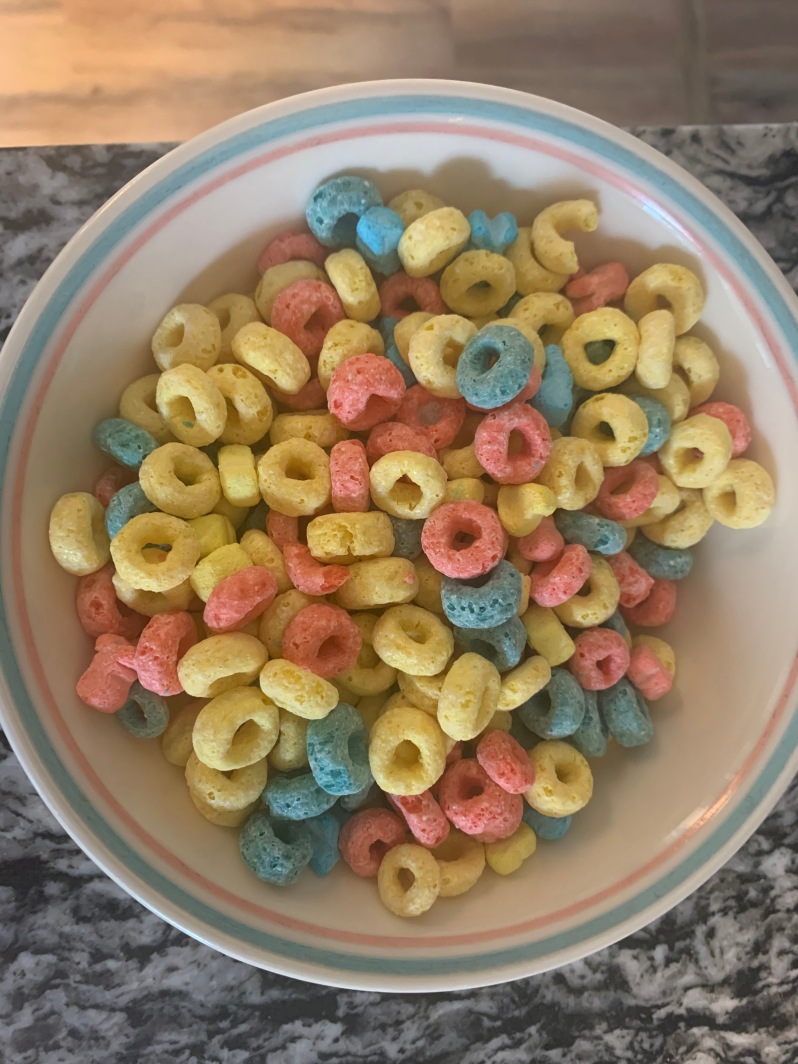 If I didn’t tell you what this was, you would think it was Froot Loops! It mostly looks like flavored Froot Loops, with a couple marshmallows thrown in. Where’s the marshmallows?!

That said, believe it or not, these mad scientists at Kellogg’s somehow make a bit of this cereal taste like you’re eating a Peeps. It’s sugar-on-sugar madness, and … yeah, it’s good. But like with a regular Peeps, I couldn’t eat it every day. It’s a once-a-week, maybe twice-a-week cereal choice.

Also, I should note, I’ve been using a new milk, lactose-free, to hopefully help with some of those after-drinking-milk bad effects I’ve talked about previously. It’s Horizon Organic’s lactose-free 2% organic reduced fat milk, which is almost more a mouthful than those Peeps. Horizon promises me that lactose-free is for “sensitive tummies.”

Well, my tummy is sensitive, and I have to admit, it felt better after drinking this milk with my cereal than it has with regular milk. The only criticism I would offer is that lactose-free milk has a bad after taste. I’m awful at describing tastes, but I would describe it as sort of metallic taste. To be clear, I’ve never had lactose-free milk before, so I don’t know what to compare it to in terms of other lactose-free milks, but in terms of run-of-the-mill 2% milk, I prefer the latter as it regards taste.

But as it regards my tummy? Thumbs up to Horizon’s lactose-free milk.

I’ll give a half-a-thumbs up to the Peeps. It was right in line with expectations: overtly sugary, with sweet Peeps-like milk to drink after, and in need of a few more cute chicks marshmallows. It also, thankfully, didn’t have the awful, lingering aftertaste that General Mills’ Jolly Rancher Cereal had.

And no, I did not play the game of counting how many chicks and bunnies there are on the back of the box, not that I’m opposed to doing so, I just didn’t have the time to hunt for ’em this morning. But, who wouldn’t want to live in Peeps land? That sounds lovely.

Have you had this cereal or lactose-free milk? What did you think of either/or?