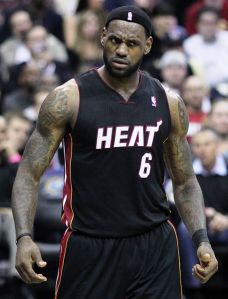 Bill Simmons had a new B.S. Report podcast up discussing tonight’s big game seven. Check it out here, as it’s worth a listen.

The Pacers have turned out to be quite the formidable match-up for the historic Miami Heat basketball team (with respect to their regular season record and 27-game win streak). If the Pacers can knock them off tonight and advance to the Finals against the San Antonio Spurs, then they effectively put a damper on a historic run. Look at the Patriots in 2007 to see that history is defined by how one close’s a season. If you don’t close it with a title, then what’s that twenty-seven game win streak mean? It’s a pretty cool stat in the modern NBA, but nothing more.

Admittedly, I can’t help but root in some respects for the Pacers since they are the underdogs (everyone thought the Heat would steamroll their way through the Eastern Conference) and I have a strong nostalgic pull from my younger days under the influence of Miller Time.

That said, I want LeBron to put Bosh, Wade and the rest of the Miami Heat team on his back and carry them into the Finals. He needs a Game Six in Boston performance tonight. Make it happen, King. Silence the peasants in the crowd.